After the Cataclysm devastated parts of Zandalar, Zul took the Golden Fleet of the Zandalari Empire and led them across the globe to reunite the other troll tribes. He also orchestrated the attempted assault on Pandaria from behind the scenes[3] to renew ties with the mogu. He is one of the main antagonists on Zandalar during the first part of World of Warcraft: Battle for Azeroth. 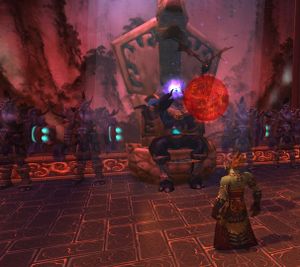 Among the Zanchuli Council are many priests and mages of incredible power and forbidden knowledge. One of the most respected of these is Zul. Even as a child his dark and terrible visions had come true down to the last horrifying detail. He commanded fear and respect as one of the dark prophets: seers capable of witnessing great tragedies before they come to pass.[4] This is a power referred to as the Sight, and Zul had a student named Vol'jamba who also had the Sight.[5] During the war against the Lich King Zul was present with the Zandalari forces in Zul'Drak, where he witnessed the Drakkari sacrificing their loa for power.[6]

Years ago Zul warned King Rastakhan of a terrible Cataclysm. For Zul had seen a vision of a great armored dragon clenching the world in his ferocious jaws. Months later Zul returned, bearing more grim news from his visions. He saw a legion of serpents pouring forth from a gaping fissure that tore open the floor of the ocean. Still, King Rastakhan did nothing. Finally, mere months before the Cataclysm, Zul returned. Tearing his clothes and throwing his staff to the ground, Zul spoke of earthquakes and tidal waves. He described the golden capital of Zandalar slowly sinking beneath the waves in the aftermath of the Cataclysm, its once-great people drowning as their mighty works slipped forever beneath the sea.[7] He advised the council and the king to unite with the other troll tribes and to abandon their doomed homeland. Despite Zul's infamy, the council refused to believe in the scope of the disaster to come. Many felt that Zul was grandstanding to increase his own status and power.[4]

King Rastakhan tired of Zul and his troubling nightmares. To be rid of the prophet, he granted Zul the use of his largest ships, so that he and his followers could seek a new land if his visions came to pass.[7] They scoffed as he and his followers began assembling a war fleet and reaching out to the lesser troll races.[4] The old prophet sailed all around the oceans, meeting with the other tribes like the Sandfury trolls or the Drakkari.[8]

But Zul's vision were visions of the truth. Deathwing's Cataclysm rocked Zandalar to its foundation. The spine of the land broke in two, and soon, the city and all its riches began to slide into the hungry sea. The Zandalari people turned to their King for help, but there was only one Zandalari equipped to help them: The prophet Zul. Even now the mighty and enigmatic troll empire slides into the sea, and Zandalari peasants and warriors alike flock to Zul for guidance on what to do next.[4] But though Zandalar was indeed damaged, it did not sink as Zul predicted. While Zul and the Golden Fleet left Zandalar, those that stayed behind endured and rebuilt.[9]

Rise of the Zandalari

Led by Zul, the Zandalari issued a call to Azeroth's embattled troll populations: unite into a single mighty empire and save their race from extinction.[10] Zul was the leader of the Zandalari delegation that appeared at the meeting of the troll tribes, inviting them to join the Zandalari at Rastakhan's proposal.[11][12] When Vol'jin refused, Zul threatened him that against the powers they would soon unleash, none would stand against them for long.[13]

In the wake of the mists vanishing around Pandaria, Zul has sent Zandalari scouts under the command of Prophet Khar'zul and Gara'jal the Spiritbinder to find out information about their ancient mogu allies. Setting up on the Isle of Reckoning, the Zandalari immediately go about invading Zouchin province, massacring a large percentage of its populace in order to penetrate deeper into Pandaria. Eventually, the Zandalari discover and reconnect with the mogu clans inhabiting the mountains of Kun-Lai Summit. The Zandalari and the mogu immediately go about raising stone, jade, and terracotta warriors to fuel the mogu army which is intent upon retaking Pandaria from the Pandaren. Zul then orders the Zandalari to find information about the dreaded First Emperor of Pandaria, Lei Shen, the Thunder King. They find his body secured by several hundred terracotta soldiers. After taking his body away, the mogu enter to raise the terracotta to fight. Although the Zandalari succeed in resurrecting the Thunder King, Prophet Khar'zul and a large amount of the Zandalari invasion force are killed in the process. Lei Shen immediately allies with Zul and goes about uniting the mogu clans and the Zandalari.

After Lei Shen's resurrection, Zul orders Gara'jal to break into the Mogu'shan Vaults and discover the secrets and weapons within to make the Zandalari stronger. Gara'jal eagerly assaults the Vaults, but he and his Zandalari forces are eventually killed on top of a terrace overlooking Zouchin Province.

Lei Shen returns to his island citadel with the majority of Zul's Zandalari army and along with the Mogu, forms then into an enormous army which is bent on reclaiming Pandaria for the Mogu and Lei Shen. Zul orders the Zandalari to immediately begin land assaults on the continent itself.

The Horde infiltrated Stormwind Stockade to free Zul and Princess Talanji. Throughout their escape from Stormwind City, Zul used his powers of prophecy to guide the group to safety; for example, telling them to jump into Stormwind's canals in order to avoid Anduin Wrynn who was just about to enter the area. Zul also set the city on fire to force the Alliance to decide between capturing them or putting the fires out. Afterward, he traveled to Zuldazar with the Horde and Talanji.[14]

In Zul's absence his pupil Vol'jamba had taken control of the Gurubashi enclave of Tal'gurub. King Rastakhan ordered Zul to deal with the situation and though agreeing Zul remarked that his former student wouldn't die by his hand. Thus Zul and the newly christened Speaker of the Horde ventured forth to Tal'gurub.[15] While he dealt primarily with his former student, he left the task of dealing with his followers to the Speaker.[16] After hearing of Vol'jamba's prophecy, Zul instructed the Speaker to dismiss it because the truth was being distorted by fear.[17] In order to deal with Vol'jamba, Zul ordered the Speaker to sabotage Vol'jamba's precautions[18] in order to kill Vol'jamba. Following the death of his former pupil, Zul remarked that it was a pity that he wasn't able to teach him the most important lesson of all - that you must plan even for the futures that you have not seen.[19] With matters in Tal'gurub dealt with, Zul sent the Speaker to report their success with Rastakhan.[20]

Under directions from Zul, Yazma enlisted the Speaker of the Horde in spreading his word to Nokali the Scarred, Doomsayer Volkini, and Dockmaster Cobo.[21] At Zul's command, Warlord Kao and the Kao-Tien launched an attack on Warport Rastari in order to lure away Zolani and Habutu from King Rastakhan's side. After discovering this, Habutu rushed to the King's side only to be killed by Yazma. Reeling from Habutu's death, Rastakhan was stabbed in the back by Zul. As Rastakhan collapsed to the ground, Zul told him that he had grown stagnant and let the Zandalari Empire rot and decay. Declaring that the Zandalari shall no longer treat with outsiders nor bargain with loa, Zul openly stated his allegiance to G'huun. When Rastakhan was rescued by Zolani, Zul refused to go after them convinced that in time they would come to him.[22] Despite his words when he received word that Rastakhan was in Zeb'ahari, Zul's followers took to besieging the village.[23] During this time, it was discovered that Zul had struck an accord with Queen Azshara of the naga.[24]

When Rastakhan recovered his strength, he rallied the Zandalari and the three eldest loa within Zuldazar: Rezan Loa of Kings, Gonk the Great Hunter, and Pa'ku Master of Winds in hunting Zul down.[25] In their hunt for Zul they discovered that he and Yazma have corrupted the once pristine tombs of Atal'Dazar on Mount Mugamba and seek to twist the power of the ancient kings buried there for their own dark machinations,[26] and revive Dazar, first king of the Zandalari, using techniques Zul learned from the revival of Lei Shen, so he could rule the reborn troll empire in Rastakhan's place.[27] Having witnessed the Drakkari sacrificing their loa for power in Zul'Drak, Zul sought to do the same to the loa of Zandalar.

Seeking to stop the prophet, the Zandalari army fought their way towards Atal'Dazar. During the confrontation with Zul, Rezan was slain and revived by Zul's dark power. While Rezan walked the lower levels of Atal'Dazar, Zul used his essence to revive Dazar, the first king of the Zandalari.[28] Rastakhan pushes Zul off a ledge to his death.

Seeking to break the final seal holding G'huun imprisoned Zul led his forces to attack Dazar'alor in order to break the final seal and release the blood god. Rastakhan, empowered by Bwonsamdi, fought Zul and defeated him, but Mythrax succeeded in destroying the final seal. The mortally wounded Zul laughed defiantly at Rastakhan and told him to enjoy ruling over his kingdom of ashes, before Rastakhan angrily shoved him off the ledge, sending Zul falling into the flames below to his death.[29] Zul would be revived as an undead by G'huun, but he was only a hollow shell of his former self. From within Uldir the blood trolls fought under his command, until a group of adventurers stormed Uldir and killed Zul, who, with his last words, declared that this wasn't the future he was promised.[30]

In Zuldazar during introduction questline

De moment I saw your face in Stormwind, I knew de time of de prophecy was upon us.

De spirits show me many things, and in dese visions, I have seen your face at de head of many great events to come.

Things are in motion, <class>. Soon, you and I will shake de very fabric of dis world.

Dazar'alor
De power dat first sat on dis throne ruled over all civilized people in dis world.
Now look at us, our power choked to a single island. Even de lesser trolls defy our power.
It will not always be dis way.

The Altar of Zul in Hinterlands may be named after him, though it being named after the Empire of Zul is probably more likely.