Frostmourne in the Lich King's hands.

"Whomsoever takes up this blade shall wield power eternal. Just as the blade rends flesh, so must power scar the spirit."
—The inscription on Frostmourne's dais

Frostmourne was the runeblade that Ner'zhul, the Lich King, thrust from the Frozen Throne, intending that Arthas Menethil would discover it on the continent of Northrend. It was wielded by Arthas until it was destroyed by Tirion Fordring. No one knew where the remnants of Frostmourne and its battered hilt were for some time.[1][2]

In World of Warcraft: Legion, a frost death knight can gather the shards of Frostmourne and reforge them into two powerful new runeblades - Icebringer and Frostreaper, the Blades of the Fallen Prince.

参见：Retcon speculation#Frostmourne When Ner'zhul was transformed into the Lich King by Kil'jaeden, his disembodied spirit was shackled to a magical suit of armor, as well as the runeblade Frostmourne, and trapped within an icy tomb called the Frozen Throne. Both the armor and the blade were crafted by the nathrezim[3] of the Burning Legion[4] for the purpose of containing and controlling the Lich King.[5] Ner'zhul was not content with being a pawn for the Burning Legion, however, and began working on a plan for escape. The first stage of his plan was set in motion when he used his powers to push Frostmourne through the ice and out of the Frozen Throne. It was sent to a cave to await one who would claim it and become the Lich King's agent. Ner'zhul found his agent in Arthas Menethil, the young prince of Lordaeron who had come to Northrend in a quest to end the plague.

When Arthas and his men arrived, they met up with Muradin Bronzebeard, a dwarven explorer who had been searching for Frostmourne after hearing of the weapon's power.[6] When the forces of the dreadlord Mal'Ganis began to close in around them, Arthas and Muradin set out to claim it.[7]

Frostmourne was defended by the Guardian and several revenants. They tried to warn Arthas of the danger, but he ignored the warning and destroyed them.

When they found the sword, Muradin read the inscription on the dais:[7]

"Whomsoever takes up this blade shall wield power eternal. Just as the blade rends flesh, so must power scar the spirit."[7]

Muradin realized then that the blade was cursed, but Arthas said he would gladly bear any curse to save his homeland. Upon speaking those words, the ice encasing the sword shattered and exploded outward. A jagged shard struck Muradin and seemingly killed him. Arthas, ignoring the loss of his friend, discarded his hammer, Light's Vengeance, and took hold of the blade.

In the hands of Arthas

With the sword in hand, Arthas returned to his base. He launched a counterattack against Mal'Ganis and quickly destroyed the dreadlord's base. Mal'Ganis confronted Arthas, telling him that the Lich King had known that he would take the cursed sword. He spoke as if he believed Arthas was now on his side, but to his surprise Arthas used the runeblade to slay him. With his soul forfeited to the Lich King, Arthas ran off into the frozen wastes of Northrend.[7]

Now a death knight of the Scourge, Arthas killed and converted his former army before returning to Lordaeron, where he was hailed with a royal welcome. Arthas proceeded directly to the throne room, where he killed his father, King Terenas, and set the Scourge loose throughout the city.

Some time after the Burning Legion's defeat at Mount Hyjal, the demon hunter Illidan Stormrage used a powerful spell to attack the Frozen Throne, where the Lich King was imprisoned. Though the spell was unsuccessful, it widened the crack through which Frostmourne had been thrust, and the Lich King's power began to wane, so he recalled Arthas to Northrend to aid him. Arthas defeated Illidan and ascended the spire to the Frozen Throne. He then used Frostmourne to shatter the ice, donned the helmet that was sealed within, and became the new Lich King.

A copy of Frostmourne appears in the game files, but has never dropped and is not available to players.

Just after he is defeated in the Pit of Saron, the undead gnome Krick lets it slip that Arthas leaves Frostmourne unattended in the Halls of Reflection, his private sanctum in the Frozen Halls of Icecrown Citadel.

After surviving the Pit of Saron, the guides for the adventurers braving the Halls (Jaina Proudmoore for the Alliance or Sylvanas Windrunner for the Horde) lead the way into the Halls of Reflection. As Krick promised, Frostmourne stands alone, floating serenely above an altar in the center of the entry chamber. Jaina or Sylvanas attempt to commune with the souls trapped within the blade to find the key to the Lich King's weakness. They are contacted by the spirit of Uther the Lightbringer, who warns them that another must take the Lich King's place in order to keep the Scourge under control.

Fall of the Lich King

During the final battle against the Lich King at the Frozen Throne, Frostmourne was shattered by Ashbringer, wielded by Tirion Fordring. The thousands of souls trapped within the blade swarmed the Lich King, suspending him in the air, where he was finished off by the champions assembled to defeat him.

On the Dedication of Honor monument at the center of Runeweaver Square in Dalaran, a bust of the shattered hilt of Frostmourne is shown at the feet of the statue of Tirion Fordring.

At BlizzCon 2011, it was stated that the shards of Frostmourne were taken by "someone smart" and put "somewhere safe"... at least until someone gets it in their head to try to reforge it.[8]

In World of Warcraft: Legion, a frost death knight can gather the shards of Frostmourne and reforge them into two powerful new runeblades - Icebringer and Frostreaper, the Blades of the Fallen Prince, but not until they vanquish the lingering remnants of Arthas Menethil and Ner'zhul within.

Frostmourne has the ability to drain life from its victims — and to drain the soul of anyone whom it connects to. The Lich King is capable of seeing through the eyes and hearing through the ears of anyone who wields Frostmourne; this ability cannot be stopped by any mortal means. The Lich King can communicate with the wielder at will telepathically, on any plane and at any distance. The Lich King uses this ability to try and corrupt the wielder over time. This has several effects. An individual who wields Frostmourne will not part with it willingly. Over time the person will go from good to neutral and finally to evil. A non-undead evil wielder will then become undead. Finally the sword is able to suck the being's soul into the sword. Frostmourne then retains the memories and skills of its victim. In fact, as long as the wielder's original body remains within one mile of Frostmourne, the sword maintains control of the body, and he may not be completely aware that his consciousness has shifted to the weapon. Beyond one mile, the sword cannot control the wielder's body, and the wielder of course finally becomes quite aware of his current state (if he is not already).

In Warcraft III: Reign of Chaos, Frostmourne increased Arthas' base damage by 22 points and allowed him to deal chaos damage, which was fully effective against all types of armor (including that of buildings and divine beings). For balance reasons, this effect was only applied during the Frostmourne mission and not during the Path of the Damned or Legacy of the Damned campaigns.

In Manual of Monsters, Frostmourne is an artifact-level bastard sword with the following abilities: an increased chance to hit (+5), increased damage (+5), an increased chance of scoring a critical hit (keen), an increased attack speed (haste), the ability to strike incorporeal creatures as though they were fully corporeal (ghost touch), the ability to cause bleeding wounds and reduce the victim's stamina (wounding), bonus damage against good-aligned beings (unholy), bonus damage against living beings (2d6), and a life-draining effect that heals its wielder whenever he deals damage.[5]

In the Icecrown Citadel raid deck, Frostmourne has a "Harvest Soul" ability. When it deals fatal damage to an opposing ally, its attack power increases by 1 and it deals 2 frost damage to each opposing hero.

In the Reign of Fire set, when one of your own allies is destroyed, Frostmourne's attack power increases by 1 and your hero recovers 3 points of health. When your hero is at full health and damages an opposing hero, Frostmourne allows you to bring one of your dead allies back into play.

Arthas: Rise of the Lich King

In Arthas: Rise of the Lich King, Arthas is able to wield the runeblade almost effortlessly, despite its size and weight. It slices through most opponents with minimal resistance, and shatters most weapons it comes in contact with. Those slain by Frostmourne have their souls drawn into the weapon.

Its greatest challenge was clashing with the legendary elven blade, Felo'melorn, which the sin'dorei scion Prince Kael'thas had reforged to combat Frostmourne. Though able to put up a defense against Frostmourne's merciless onslaught, its fiery origins proving a good counter to the icy runeblade, Kael'thas ultimately abandoned the battle, leaving Frostmourne undefeated. 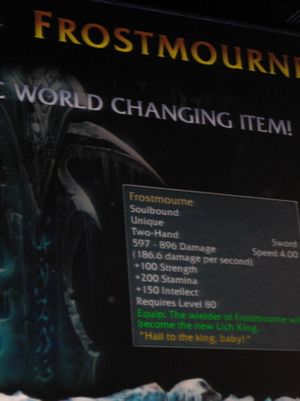 Theoretical stats for Frostmourne as a World of Warcraft item were shown during the Lore Panel at BlizzCon 2007, likely as a joke. The quote on the item tooltip, "Hail to the King, Baby!", is a phrase popularized by Bruce Campbell's Ash at the end of Army of Darkness.

The developers said they were "still working the fine details" and that the Equip effect was "shot down by various powers-that-be" (illustrating the potential problem with a screenshot of the new Lich King, Private Ownusohard). However, they closed with "we'll get something to you guys, we promise."

During a Class Panel Discussion at BlizzCon 2009, Blizzard developers revealed that the "something" in Icecrown Citadel was a new legendary axe, Shadowmourne.

Frostmourne Replica Unleashed | 2008-03-14 18:38 | Bornakk
The legendary rune blade Frostmourne was immortalized in Warcraft III, in which it was taken up by Prince Arthas Menethil, corrupting him and leading to his transformation into the Lich King. We've partnered with EPIC Weapons to create a limited edition replica of the blade in all its horrific glory. This artifact of ancient evil is over 47" long and 12.5" wide, weighing a massive 16 lbs., and is now available for pre-order. For more information, please visit the Frostmourne replica site.

The following notable characters were slain by Frostmourne or otherwise lost their souls to it. With the possible exceptions of those brought back as undead creatures, it is presumed that their souls remained trapped in the sword until its destruction.

According to King Terenas Menethil II's spirit, there were thousands of souls contained within the blade. Countless souls were freed from the broken blade, but others were not so fortunate.[10]