It was Leza's visions that led us here. Each of us have had dreams of a valley, golden with blossoms, filled with the hope of peace. Even our chieftain 贝恩·血蹄 had these dreams.

The Vale of Eternal Blossoms is a zone at the center of the continent of 潘达利亚. The Vale has great cultural importance to both the 熊猫人 and mogu, particularly the 魔古山宫殿. Formerly known as a Cradle of Life[1] and used as a place of experimentation by the 泰坦s similar to 索拉查盆地 and 安戈洛环形山, this vale of golden flowers and trees served as the seat of power for the rulers of Pandaria, such as the mogu rulers following the death of 雷神.

After the 联盟 and 部落 came to Pandaria bringing their war with them, the August Celestials decided to reopen the gate after sealing it following the downfall of the mogu empire. The Alliance and Horde proved themselves in aiding the Golden Lotus in defeating the Shao-Tien mogu. Later, 大酋长 加尔鲁什·地狱咆哮 used the vale's power as a means to revive the Heart of Y'Shaarj. The Old God's power utterly destroyed the eastern half of the vale, causing some to refer to it as the Vale of Eternal Sorrows.[2] Following the 决战奥格瑞玛, 少昊's spirit planted a magical tree in the center of the destruction, providing hope that the vale will heal one day now that Pandaria need no longer fear the seven breaths of Y'Shaarj. 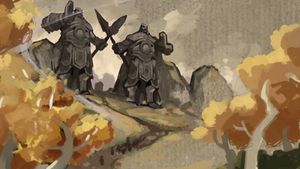 As seen in The Burdens of Shaohao. 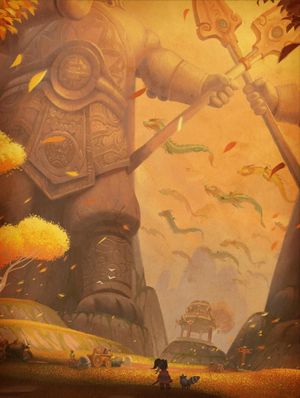 In the years that the Titans were on Azeroth, the Vale of Eternal Blossoms was a place Freya created and experiment with forms of life, like 安戈洛环形山 and 索拉查盆地. All three locations were places where the power of the 永恒之井 had coalesced. The Wild Gods emerged from these cradles of life.[3]

At the same time, they were fighting the Old Gods and their servants, the mantid, so they created the mogu to be guardians of the Vale and fight off the waves of mantid.[4] When the Old Gods were defeated and the Titans became silent, the mogu continued their work until the Curse of Flesh swept through the land. Unsure of what to do, the mogu started forming into clans and began fighting with each other, until 雷神 rose and united the clans. Lei Shen and his mogu enslaved the creatures of Pandaria and forced them to build the Great Wall to block the mantid from his new empire, and protect the Vale at the same time.

The jinyu had their beginnings in the Vale of Eternal Blossoms, evolving from murlocs fortunate enough to live near the enchanted pools of the Vale. The magic of the pools expanded their minds and grew their bodies, until they became one of the great ancient cultures of Pandaria.[5] At some time following the departure of the Titans, but before the rise of Lei Shen, the jinyu empire ruled over Pandaria from the Vale of Eternal Blossoms. During the reign of mogu emperor Lei Shen, the mogu invaded the jinyu kingdoms and slaughtered all who opposed them, presumably wresting from them control of the Vale.

When the mogu were overthrown by the 熊猫人, the capital was moved east to the Jade Forest, and the Vale's gates were closed off to the outside world, to all but the chosen few who become member of a small group of caretakers known as the Golden Lotus, the guardians of the valley, keeping it pristine and safe, with occasional help from the Shado-Pan. After the Vale was sealed off, it became something of a mythical place in pandaren culture. The land's towering waterfalls, white-capped peaks, and beautiful architecture have spawned legends, myths, and poems,[6] such as the "Song of the Vale".[7]

Shortly before the Great Sundering, 少昊 traveled to the Vale after having purged himself of his burdens, and it was in the Vale that Shaohao became one with the land to save Pandaria from the Sundering.[8] It is said that all the trees in the vale blossomed as he entered, and continued to blossom for thousands of years.[9][10]

文件:Vale pre-corruption.jpg
魔古山宫殿 and the Vale of Eternal Blossoms before Garrosh Hellscream defiled it with the Heart of Y'Shaarj's energies.

In more recent times, the Golden Lotus have become increasingly concerned after spotting mogu scouts that somehow circumvented the gates. They are in need of the Shado-Pan's aid again, and perhaps new strangers as well, should they prove worthy of the privilege. Any adventurer who is able to aid the Golden Lotus will quickly discover that the mogu intend something grander than simple scouting within the Vale. Xin the Weaponmaster has gathered several Mogu clans under his banner at 魔古山宫殿 and the Shao-Tien to the west have begun a full-scale assault on the Vale, and their plot ties in with the return of the master of all mogu, the dreaded Thunder King himself.[11]

The Golden Lotus learned that a child within the Vale was destined to join their order, but after testing several pandaren children at the Shrine were unable to locate the child. Chi-Ji then appeared and found his way to Dezco's sons, announcing that one of them was destined to serve the vale. The Tauren unwilling to be departed from either of his children decided to leave the Vale and return to Mulgore in secret. However he was intercepted by Mokimo the Strong, Weng the Merciful and Rook who choose to protect until he had left. However the group was ambushed by the Shao-Tien mogu, and in the end only one of Dezco's two sons survived. While Dezco was free to leave for 莫高雷, he decided to give Redhorn to Mokimo in order for him to serve the Vale and the Golden Lotus.[12]

Vol'jin: Shadows of the Horde

Following the rebirth of the Thunder King, 雷神 ordered the Zandalari to begin the process of resurrecting his generals. Learning this Vol'jin, Tyrathan Khort, and the Shado-pan allies sought to prevent the resurrection of Warlord Kao. However despite their best efforts the group was captured, Brother Dao and Brother Shan used as two of the four sacrifices and Warlord Kao was reborn. The quick actions of Vol'jin and Khal'ak protected the lives of Chen Stormstout and Brother Cuo from the Mogu's wrath. Disgruntled at this Warlord Kao directed the Zandalari to return him to his master and the group, prisoners and all, departed for the 雷神岛.[13]

加尔鲁什·地狱咆哮 ordered his goblins to excavate the vale in order to find artifacts. The goblin mining crew unearthed a dark secret.[14]

But then came the one called 加尔鲁什·地狱咆哮, and he left only destruction in his wake. By the time he left, the waters of the Vale were no more.

The Vale's desecration by the Horde excavation and subsequent unearthing of the Heart of Y'Shaarj by Garrosh has stirred the final Sha prime, the Sha of Pride. The immense corruption laid waste to the once beautiful landscape, and the lesser sha now roam the swath. Mogu'shan Palace and the mogu statues were also damaged.[15] The Eternal Blossoms, the namesake of the Vale, started to die[16] despite having once been said to never wilt.[17]

The water pools have been warped by the Sha energies and reformed into an elemental horror, Immerseus.

The August Celestials have determined that they will work together to rebuild the Vale,[18] with a cleansed tree given by 少昊.[19] By the time of the Iron Horde's invasion of Azeroth, the Vale has been cleansed[20] thanks to the efforts of the Golden Lotus.[21]

The very short quest chain to open the 天神之门 begins at level 87 in 昆莱山 at the 白虎寺. There, Xuen, the White Tiger, is hearing petitions to open the gate, but he has tests for members of the 联盟 and 部落 after the disaster at 神龙之心 in the Jade Forest. Over the objections of Taran Zhu of the Shado-Pan, Xuen accedes to Anduin's and Dezco's requests to open the gate. After A Witness to History, the gate is opened and adventurers can travel into the vale at their leisure.

Alternatively, any player of any level can enter the Vale of Eternal Blossoms by traveling to the 影踪别院 in 昆莱山, climbing the stairs within to the top of the 蟠龙脊, and then jumping off of it into the Vale. A mage can also open a portal to the faction hub in the Vale for players of any level.

The land contains six sacred pools, which are the lifeblood of the vale. Each of these powerful pools represent a positive emotion and is capable of healing wounds that even the Light is not capable of. Only five of the pools can be seen, while the last is found deep within the 魔古山宫殿.[22]

Each pool corresponds with the negative emotions of the sha: Anger, Despair, Doubt, Fear, Hatred, and Violence. They are the pools of Fellowship, Hope, Faith, Courage, Love, and Peace.

Recently the Bilgewater goblins have begun excavating the Summer Fields in search of an artifact by 加尔鲁什·地狱咆哮's orders. During the dig they destroyed one of the sacred pools.

Later, all of the pools have been corrupted by the Sha of Pride and reformed into an elemental named Immerseus. The eastern part of the Vale is either withering or covered in Sha energy. Mogu'shan Palace was damaged in the process and a hidden entrance to some sort of inner complex was unearthed. 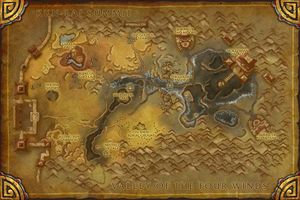 The Vale of Eternal Blossoms is driven primarily by a single faction, the Golden Lotus, the caretakers of the Vale. The Golden Lotus have long been peaceful, with little need to fight inside their tightly locked valley, but when things come to conflict, the Golden Lotus seek out the nearby Shado-Pan to aid them. Though players are working for the Golden Lotus for the entirety of their time within the Vale, they are also fighting alongside several Shado-Pan heroes along the way, aiding the Shado-Pan at the 残阳关卫戍营, and are joining the Shado-Pan in the defense of the 蟠龙脊 wall.

In working for the Golden Lotus, players are able to experience more than 100 daily quests within the Vale, by far the most daily quests for a single faction in the game. Each day, after aiding the Golden Lotus in fending off mogu attacks near the central Vale, players can expect to be sent to random locations, each location seeded with random quests, and each quest environment featuring random variations to the monsters, defenders, traps, and other features located there. To provide even more variety, a mogu attack force roams the vale, moving to different locations each day, so players may find that the peaceful village is now being raided by the mogu, or that the normally spider-infested ruins have been turned into an established mogu camp, entirely changing the experience at these locations for the day. No matter what reputation the players have or where they were sent in the vale, they are getting to end their day with one of more than 20 unique boss fights that were constructed just for this zone.[11]