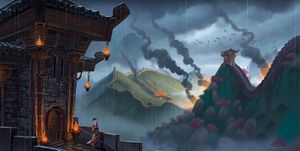 Only the bravest pandaren dare enter these highlands. Although the area remains uncorrupted by the Sha, only the nomadic yaungols and the mantid choose to make the region their home.[1]

螳螂高原（Townlong Steppes） is relatively small zone located in northwestern Pandaria. The main story that is played out here involves aiding the Shado-Pan on their pursuit against the Sha of Hatred, and aiding them in fending off the Osul yaungol and the aggressive mantid coming from the south.

The mantid are a rampaging insect race separated from the rest of Pandaria by the Serpent's Spine. Located in the Townlong Steppes, they devour everything in their path in order to build their own crystalline empire of ruthless warriors and scheming feudal lords. The pandaren are left reeling when the mantid's hundred-year cycle of aggression kicks off ten years too early and their greatest warriors burst through the great wall. The beleaguered pandaren must now face the worst swarm in recorded history while trying to isolate the cause of the mantid's erratic behavior.[2]

The events in Townlong directly follow up on what happened in Kun-Lai Summit. There, Taran Zhu, the leader of the Shado-Pan, had become overwhelmed by the Sha of Hatred. The rescue at the Shado-Pan Monastery is an important moment for Taran-Zhu; he'll finally see the value that the Alliance and Horde bring to Pandaria, and players will have earned a staunch ally.

The story picks up from there. In Townlong Steppes, Taran-Zhu is tracking down his nemesis, the elusive Sha of Hatred that's blasted its way across the zone. You'll get to ride with the vanguard with the Shado-Pan vanguard, but they've got a lot of ground to cover. The Steppes are home to the Yaungol, who are still on the warpath. Meanwhile, the mantid are encroaching from the south. The sacred Niuzao Temple is under siege, and a splinter sect of Mogu are trying to create their own dark demigod on an island off the coast.[2]

Eventually, the mantid assault on Niuzao Temple and Townlong was discontinued with the death of Grand Empress Shek'zeer. Next, the Shan'ze Mogu led by the dreaded Shan Bu besieged Niuzao Temple. Mogu siege engines managed to break through the Pandaren defenders, nearly annihilating them in the process. After the Shan'ze occupied the inner courtyards, Shan Bu himself entered the temple and put Niuzao under a spell. After Niuzao refused to give up, Shan Bu ordered the watching Mogu and cloud serpents to launch a final assault on the defenders. However, the mogu failed in their assault, and were driven off of Niuzao Island. Shan Bu and the Shan'ze simply returned to the Isle of Thunder and formed up with Lei Shen's enormous legions. Shan Bu left some Mogu behind to secure Shan'ze Dao for the Thunder King.

Townlong Steppes is accessed on foot via the Ox Gate in western Kun-Lai Summit. From there, travel south across the zone to cross in to the Dread Wastes either via the Shallowstep Pass next to the Serpent's Spine in the east, or the Dusklight Bridge far to the west.

The contiguous areas of the steppes consist of grass-covered hills sprinkled with red-leafed trees. The northeastern areas are more sparse, with great rocky crags, mostly taken by the yaungol. A deep divide separates the bulk of the steppes from the Dread Wastes, and within this divide is a marsh and river that leads out to the sea. There is also a small pocket of bog or marsh situated in the eastern side of the steppes, south of Longying Outpost.

There are a handful of islands that make up the western half of the steppes. The southwestern-most and western island are both taken by the mantid, with their great central trees and pod-like architecture. The Niuzao Temple island is indicative of the grassy hills of the greater steppes, though the mantid have infiltrated here, as well as the sha in the catacombs beneath the temple. The northern-most island has the most caves and is home to sprites and cloud serpents, dotted with ancient ruins. More steep hills can be found here, as well as a heavy mogu presence. 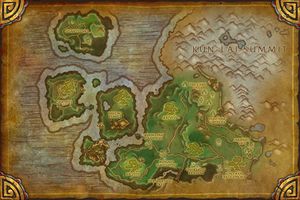 The four August Celestials of Pandaria need your help, but never all at once. Here in Townlong, the Black Ox will need a hand as well. On some days he'll rest quietly at the temple while you complete missions in the surrounding terrain. But on alternate days Niuzao will be on the warpath, actively defending his temple from a mantid assault. If you're clever, you'll lure the mantid into his rampage and he'll help you slaughter them in big groups.