Never underestimate the other ethereal's greed!

Treading the chaotic spaces between worlds, the ethereals are astral travelers who dwell within the 扭曲虚空. They are known to be collectors and traders of arcane items and artifacts. Now drawn to 外域, many ethereals are seeking to track down its treasures and steal them back into the Twisting Nether. They are liars and scoundrels who will stop at nothing to pursue their mysterious aims. The ethereals have no care at all for the Burning Crusade. They would even play both sides of the conflict against each other if doing so would serve to further their own goals.[1]

Ethereals can be found in 纳格兰 south of 日泉湖, in the Mana Tombs of 奥金顿, the 刀锋山, and throughout the 虚空风暴. A small number also dwell in Shattrath. The ethereals are driven by trade and economics, and accordingly, their political structures are centered around trade princes and political "companies". The ethereal faction called The Consortium, which players can gain reputation with, is one of these. The ethereals that currently control the Mana Tombs in 奥金顿 led by Nexus-Prince Shaffar are another of these "political companies." The Ethereum is a radical militant organization that attempts to avenge the destruction of the ethereal homeworld by void creatures. The Protectorate attempts to thwart the void and protect neutral races from the Ethereum's attacks.

The ethereals are similar to goblins, in the way their political systems work, and like the goblins, the ethereals will support anyone who would further their profits, and oppose anyone who dares interfere with their plans. The ethereals also share in the goblins' propensity for technology, though their technology appears to be far more powerful and otherworldly. Ethereals possess everything from the familiar, such as transporters, to the radical, such as their eco-domes. They utilize a unique school of magic known as technomancy.

While most ethereals seem completely neutral, the Consortium later allies with the Sha'tar.[2]

Uniquely aggressive and pugnacious elekk bulls are culled from the herd and sold to ethereal traders. The traders then train the bulls for combat and sell them to owners unconcerned about safety.[3] 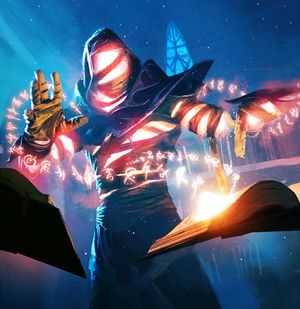 K'aresh was an arid planet, home to a thriving ecosystem and several sentient species. The race that would become the ethereals was led by Nexus-King Salhadaar.

How Dimensius the All-Devouring found K'aresh is still hotly debated among the surviving ethereals, but the effects of his coming were unmistakable: he opened countless gateways into the Void and the 扭曲虚空 around the planet, bathing K'aresh in arcane and dark energies. Using every scrap of its advanced technology, one of the mortal races hastily attempted to construct magical barriers around its cities, but it was only partially successful; although the dark energies were blocked, the unimpeded flood of arcane energy tore away the mortals' corporeal shells and infused their souls with enough energy so that they could subsist without a body… barely. Members of this race, now called ethereals, took to binding themselves with enchanted strips of cloth to provide their souls with enough structure to survive. This altered state proved to be a blessing in disguise, as their enhanced minds and magical abilities allowed the ethereals to fight Dimensius and his limited forces to a standstill. Over the years, however, Dimensius eventually grew powerful enough to summon armies of fellow void creatures, forcing the ethereals to flee into the Twisting Nether.[4]

The Ethereum, which held the ruling council of Nexus-Princes, started becoming dark and twisted in their obsession for vengeance. This caused many of the Nexus-Princes to leave the council and form their own organizations with their own goals. Undeterred, the Ethereum continued in the search for vengeance against Dimensius, destroying anyone in their way. The Protectorate was formed by a Nexus-Prince, who left the council, to stop the Ethereum in their destructive path.[5] The Consortium is another offshoot group, one of smugglers, traders, and thieves, that aids the Protectorate in their endeavors.

A group of ethereals made their way into 卡拉赞.

The Ethereum and their ambassador, Wind Trader Mu'fah, appear to have negotiated an accord with Malygos and the blue dragonflight during the Nexus War. Years later they used this connection in a second attempt to "become void" (see below).

Groups of entrepreneurial ethereals have emerged from the nether to offer a host of new technologies and services that will allow the adventurers of Azeroth to customize and store their equipment. Ethereal warpweavers, vaultkeepers, and thaumaturges will set up shop in 暴风城 and 奥格瑞玛 to give players access to Transmogrification, Void Storage, and Reforging, for nominal fees. K'areshi Traders are found coming out of portals at 麦索瑞尔 in 冬泉谷.

Ethereal traders have journeyed to Pandaria and set up shop in both the 七星殿 and the 双月殿.

It is revealed that in exchange for their aid in the Nexus War, Malygos had promised the Ethereum access to the blue dragonflight's treasures within the Nexus. The Ethereum seeks to become an unstoppable force—to become void,[6] and they are using the 湍流之针s in Coldarra to bore into the 扭曲虚空 and call up void energies.[7] After their leader, Nexus-Prince Bilaal, is defeated by an adventurer and Azuregos, Azuregos remains in the Nexus so it will not fall into the wrong hands again.[8]

More ethereals called the Shadowguard, led by Viceroy Nezhar, can be found in 玛凯雷 on 阿古斯. They are of a certain subset of the race that have tragically succumbed to the call of the Void.[9] They are calling the Void to Mac'Aree[10] to cause all of Argus to fall to darkness.[11]

Consortium Arcanists have been hired by the Horde and Alliance to maintain portals to 沙塔斯城.[12] They can be found within 奥格瑞玛 and Stormwind's new portal nexuses, located within the Gates of Orgrimmar and 法师区, respectively.

Originally, ethereals had physical form. When Dimensius the All-Devouring assaulted their homeworld of K'aresh, however, the arcane energies he unleashed on them ripped apart their bodies. Only their advanced technology allowed them to survive - barely - as beings of pure energy. Ultimately, it was this very change that allowed them to battle Dimensius on an even-footing and travel through the 扭曲虚空 to find refuge.[4] Their bodies can take many forms, able to be compacted into small sizes, or expanded to their true form: a mass of glowing energy with vaguely distinguishable head, eyes, and arms. When not covered in their magical wrappings, they are described as beings of pure energy; a mass of irregular power.[13]

They most often appear in their specially enchanted wrappings that keep their energy forms bound within their humanoid shapes. Ethereals appear to need to eat and drink, with their vendors selling specialty bread and drinks not found on vendors of other races. The Ethereal Soul-Trader sells an Ethereal Liqueur that can have an odd effect on 'fleshy imbibers' suggesting that ethereals drink it themselves with no ill effects. Based on the foods Eyonix sells and their interest in gems, it could be thought they consume them and precious metals. Alternatively, ethereals may not eat at all and sell food only for the sake of the more corporeal beings with whom they trade and interact. Wind Trader Lathrai says that 天涯旅店 has nothing to offer for his kind.

Ethereals apparently do not require sleep.[14]

Void ethereals are ethereals infused with the power of the Void. Their energies are dark purple or red. They also hear maddening whispers that sway them to do the will of the Void.[15]

Nexus-stalkers are a partially void-based form of ethereal created by the rogue Ethereum faction, and are considered by the Protectorate to be aberrations.[16] Though the Ethereum was initially dedicated to hunting down and taking revenge on Dimensius, their goal later changed to "becoming void." To that end, they constructed a proto-accelerator which was used to manipulate the abundance of Void energy at 法力熔炉：乌提斯, bonding it with their own energy to transform into nexus-stalkers.[17]

The physiology of a nexus-stalker is similar to that of a typical ethereal, albeit with hybrid bodies composed in part of Void energy. As such, they appear translucent and perpetually emanate a shadowy, purple miasma. Those that have been encountered have had the ability to drain their enemies' power.[18]

The Protectorate eventually put an end to the operation and killed Nexus-King Salhadaar.[19] A number of nexus-stalkers still existed at the time of the Burning Legion's third invasion of Azeroth as part of the Ethereum's efforts in 考达拉.[20]

Each group is led by a Nexus-Prince, all of which came from or are still part of the Ethereum.

本节内容来自《炉石传说》。
Several ethereals have appeared in Hearthstone, most notably Nexus-Champion Saraad and Arch-Thief Rafaam. Saraad, a champion jouster participating in the Grand Tournament, rides atop an energy-camel, a creature that has yet to be seen in World of Warcraft proper. Rafaam, the so-called "supreme archaeologist," leads a band of villainous ethereals in opposition of the League of Explorers in the adventure of the same name. Rafaam controls three extremely powerful artifacts: the Lantern of Power, the Mirror of Doom, and the Timepiece of Horror. In the One Night in Karazhan adventure, there is a rare rogue card known as the Ethereal Peddler, which speaks with a distinctly feminine voice, indicating that it is the first known female ethereal to appear in the Warcraft universe.