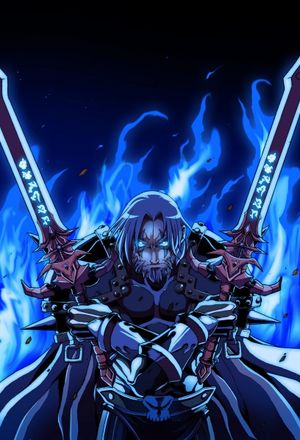 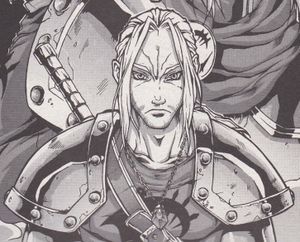 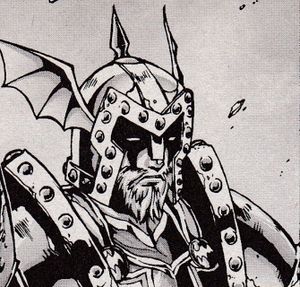 Arthas' assault on Quel'Thalas introduced Thassarian to the high elves Koltira and his brother, Faltora, at An'owyn, where he pursued the mooncrystal to open the second moongate and proceed with their attack. Thassarian nearly killed Faltora, but, upon remembering his mother, he decided to show a moment of mercy. He returned to Arthas with the mooncrystal that he recovered. Koltira later confronted Thassarian and questioned why he didn't murder his brother, hoping to convince him to regain his humanity. This attempt failed, and Thassarian killed Koltira, who was returned to undeath as another death knight. Koltira and Thassarian developed a significant friendship that lasts to this day.

Years later, after the Lich King had awoken the Lich King ordered his death knights under the leadership of Darion Mograine to attack Light's Hope Chapel using the necropolis Acherus with the goal of raising the thousand or so Alliance soldiers buried beneath it to bolster the ranks of the Scourge and deal a significant blow to the Argent Dawn. Thassarian, Koltira and Orbaz Bloodbane were stationed at Acherus: The Ebon Hold. Their first mission was to go behind enemy lines and find out what they could about the Crimson Dawn. During the process Koltira got captured and Thassarian was willing to break the Scourge code concerning the weak to free him.

The attack on Light's Hope Chapel ended with a defeat for the death knights. Many of the family of the death knights were buried at Light's Hope Chapel, and the spirits of their relatives rose to convince them to lay down their weapons. Thassarian was convinced by his father, Killoren, to stand down. Mograine declared the independence of the Knights of the Ebon Blade. Thassarian traveled to Stormwind and met with King Varian Wrynn who accepted the Knights of Ebon Blade as allies and readmitted its members as members of the Alliance.[1][2] After this, he went to the Blue Recluse for a drink. He chose this place because he used to come here for the great food, drinks and conversation. He started such a conversation with the innkeeper Steven Lohan when he ordered a mug of ale. Steven told him he heard of the king's announcement and asked him what he'll do when the Lich King is dead. When Steven asked him if he'll return to his family, Thassarian simply said he had no family. Thassarian at the Wailing Ziggurat in Borean Tundra. Thassarian, Champion of the Alliance.

After joining the Alliance he traveled to Northrend and enlisted in with the Valiance Expedition. There at first he had to kill random Scourge in the area but later he was called to return to the Valliance Keep, where Counselor Talbot made him the leader of Unit S and under orders he marched to Wailing Ziggurat to dispose of it and use the Scourge technology against the Lich King. When Unit S approached their destination, they got attacked by terrible beasts. During the battle, he raised a skeletal warrior, naming him Lurid. Thassarian thought why would Talbot sent the Unit to meet their death. They eventually discovered that one of the soldiers in the unit was actually a spy for the Cult of the Damned.[3] Only two men are known to have survived from Unit S. Thassarian and Lurid continued to the ziggurat. He found (in-game with the help of an adventurer) Tanathal's phylactery and started to interrogate him and the High Deathpriest Isidorus. After getting what he wanted, he traveled to Naxxanar, where he killed Luthion the Vile. Finally, he confronted Counselor Talbot who was truly Prince Valanar.[4] Atop of Naxxanar, Prince Valanar was speaking with the projection of the Lich King and was about to give him General Arlos and Leryssa. After a fierce battle, Thassarian defeated Valanar and rescued his sister and the general. After this, he said farewell to his sister and promised her that he will return to her once his task is done.

After his victory and rescuing his sister in Borean Tundra, he traveled to Icecrown Citadel on the The Skybreaker where he seeks to further damage the Scourge. Being a former scourge minion, he knows many things about the Scourge and sends random soldiers to gather information about the cult, find flesh giant spines, neutralizing plague cauldrons and kill important Scourge members. He later appears in the Cathedral of Darkness to help Tirion Fordring when his cover is blown. Both of them and their allies fled in time. Thassarian regrets having to let the Lich King live in his weakened state.[5] 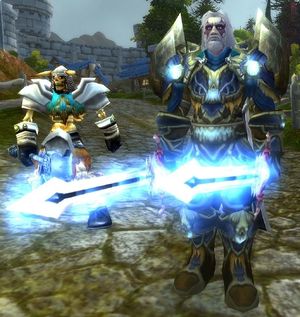 Thassarian and Lurid in Andorhal, commanding Alliance forces against the Forsaken.

The Alliance and Forsaken were fighting over control of Andorhal and the remaining Scourge presence there. The Alliance, led by Thassarian, took control of the western portion of the town while the Forsaken, led by Koltira Deathweaver, took control of the eastern portion.[6] Over the course of the Battle for Andorhal, Thassarian sent Alliance heroes to deal with the remaining Scourge forces and after defeating their leaders, Thassarian and Koltira entered a truce. Some time afterwards, human farmers formed a militia and launched a sneak attack on Koltira's Forsaken forces. With his hand forced, Thassarian resumed the war with the Forsaken. Victory was almost in the Alliance's grasp until the Forsaken started employing the Val'kyr.[7] With the Val'kyr raising their dead, the Alliance forces were overwhelmed and were forced to retreat to Chillwind Camp. Thassarian's minion, Lurid, was killed in the Forsaken assault.[8]

With the Battle of Andorhal over, Thassarian was said to head off to Tirisfal Glades to hunt Sylvanas in an attempt to find out what happened to Koltira.[9]

Thassarian later reappeared in Mount Hyjal to do battle with the forces of Ragnaros.[10]

Thassarian accompanied the Deathlord to raise the new Four Horsemen. In Durotar, Nazgrim was raised as Thassarian told him that he was called to the battle. When the Deathlord arrived in Stromgarde, Galen Trollbane had told them remnants of the Witherbark tribe still lingered behind the keep. After the Deathlord took care of the remaining trolls, Galen exclaimed that his kingdom is his alone and will not have it be taken away by anyone. As Nazgrim saw this as treachery, Thassarian had lost his patience with the situation and told the Deathlord to take the family heirloom to open the tomb themselves. The Deathlord then raised Galen's father Thoras Trollbane back from the dead, who demanded to know where his son is and what has happened to his kingdom. Thassarian responded that they took his life and that the kingdom lies in ruins for time has not been kind. Even though Stromgarde was no more, he told Thoras that there was still hope to save Azeroth.

A personal request to free Koltira Deathweaver from his imprisonment in the Undercity was in order, even if it meant displeasing the Dark Lady in this dire hour. The Scarlet Monastery was where the third horseman High Inquisitor Whitemane would be raised. He said that the Knights of the Ebon Blade would offer her a chance at atonement. The price would be high, but Thassarian had little doubt she would pay it and they would see it through together.

During the Battle for the Exodar, Thassarian and Nazgrim participated in fighting against High General Rakeesh. Thassarian admitted that he was beginning to have second thoughts about Nazgrim after the orc demanded they stop continuously so he could Strangulate each individual demon invader. 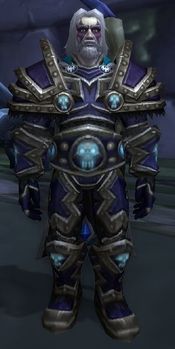 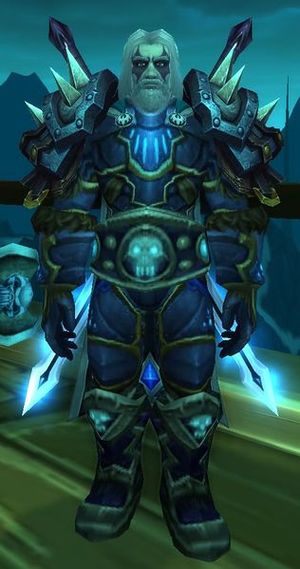 Thassarian and Lurid onboard the Skybreaker.

He is first encountered in Acherus: The Ebon Hold as a level 55 standing next to Orbaz Bloodbane and Koltira Deathweaver. In phase two after completing Quest:Victory At Death's Breach!, he relocates to the Scarlet Tavern with Bloodbane, where he is involved in the following quests:

He shows up at the Battle for Light's Hope Chapel as a level 60 elite taking part in Quest:The Light of Dawn.

He next appears for all classes at the Wailing Ziggurat in Borean Tundra, where he is involved in the following quests:

Thassarian can later be found aboard the Alliance airship the Skybreaker above the skies of Icecrown. He is involved in quests that unfold The Shadow Vault among others. He also plays a part in the unfolding storyline of Wrath of The Lich King.

"Sometimes lessons are painful, aren't they?" - To William Allerton.
"All I ever wished was to serve my king once again. For humanity, against a common enemy.
Instead, I find that our numbers have been infiltrated by cultist scum.... and all of the signs point to Naxxanar as the origin of this rot."

The quest Last Rites
See Dialog between Thassarian and various others atop Naxxanar.

Speak, Lich! Undeath won't save you from what I'll put you through! 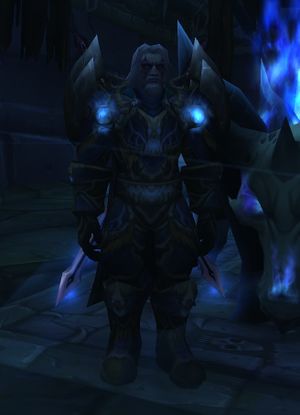 It is here where we must set aside our differences and work as a united Knights of the Ebon Blade if we are to defeat the Demons.

The world will cry out in anger against us, but the air that fills their lungs will have been bought with the price of our souls.