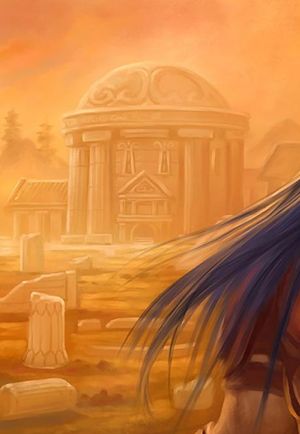 As seen in the TCG for Sanath Lim-yo.

辛玛洛神殿（Temple of Zin-Malor），又称艾露恩神殿（Elune's temple）是位于埃达拉斯废墟的一座古代建筑。它曾是一座重要的暗夜精灵神殿，用来供奉他们的神灵艾露恩。辛玛洛神殿与邻近的亚考兰神殿十分相似，都与现今位于达纳苏斯的月神殿有着类似的设计。The temple is currently occupied by the Spitelash tribe of naga under the leadership of Warlord Krellian, who himself inhabits the temple in a place of honor. The [Crystal of Zin-Malor] once rested here.

The temple has at least one undergound royal vault, which contains a chest of pandaren design, the last gift the pandaren gave to the highborne before cutting ties with the night elves. The pandaren said it contained all the arcane magic the highborne would ever need, but was in fact completely empty. The gift was actually a message of advice and wisdom to the highborne: that they did not actually need arcane magic at all. [1]

The Temple of Zin-Malor may have been the original Temple of the Moon as it is called "Elune's temple" at one point in the RPG.[2]