Facets of the Goddess

艾露恩从未以实体形态被人们在艾泽拉斯所看见。Indeed, she is as much a collection of ideals and principles as she is a personality in her own right. 这位强大的女神本质上是虚无缥缈的存在。尽管如此，艾露恩依然经常被描述为一个超出常人的完美的女性卡多雷，她头戴一顶银色白金头冠，身体四周散发出耀眼的光芒。暗夜精灵工匠中的传说则将她描述为：一头银色的长发、光洁雪白的肌肤和一双散发出月亮光辉的眼眸。

众所周知的是，艾露恩唯一的伴侣是：半神玛洛恩。 他们诞下了一名孩子，名为塞纳留斯, 他继承了其母亲对艾泽拉斯的无私大爱以及其父亲与神秘的翡翠梦境之间的联系。The natural world is intimately connected to the moon goddess as a result, and for more than ten thousand years, the night elves have reflected this by arranging their society according to a harmonious balance between the dual ethos of druids and priestesses, which is embodied in the present age by the union of Malfurion Stormrage and Tyrande Whisperwind. 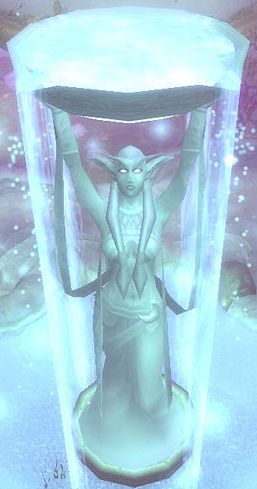 从有记载的暗夜精灵的历史开始，他们对艾露恩的崇拜可以追溯到至少14000年前。然而，毋庸置疑的是，在这之前，艾露恩就已经被更为原始且分散的形式受到崇敬。艾露恩姐妹会在古老的卡多雷首都辛—艾萨莉中建立了已知的首个信奉艾露恩的中心。这群姐妹在某一天将这座神殿搬到了苏拉玛城，正是如此，艾萨拉女王以及上层精灵们开始明显日益疏远月亮女神的信条。 After Suramar itself had fallen to the onslaught of the Burning Legion, Elune became a profound source of hope and humility to all night elves as they witnessed the Ancient Guardians of Azeroth rally under the blazing moon to come to the defense of a world being put to the flame over their civilization's mistakes.

In the era between the War of the Ancients and the Third War, a period known as the Long Vigil, devotion to Elune had essentially become universal among the kaldorei but was practiced without centralized places of worship, much like in ages past. The Sisters of Elune have recently founded a new temple for the moon goddess however, the first of its kind since the complex at Suramar itself: the Temple of the Moon within the night elven capital city of Darnassus. Elune's chosen, Tyrande Whisperwind, resides here both as high priestess and as head of the kaldorei government, and by her side stand many priestesses (and for the first time, several male night elven priests) ready to venture out and soothe a war-weary Azeroth with the Mother Moon's healing light.

艾露恩常常被称作月亮母亲，因为她重视安静平和，以期使艾泽拉斯上的生灵得到最大的培育。然而，当艾露恩推行的和谐安宁受到威胁时，她就不会再追求和平了；艾露恩姐妹会的初学者开始被广泛训练战术及战斗技巧并作为夜之战士而奋战。Elune expects devotion from her priestesses, but never demands they give her every waking moment — the Mother Moon is experienced by her daughters as a nurturing, loving matriarch whose expectations are not oppressive in nature. Whereas Elune is the center of reverence for the Sisters of Elune and the sentinels, the kaldorei druids have devoted themselves to the teachings of Elune's only child; the demigod Cenarius. As such, there exists a deep and intimate link between the spirituality of the night elven druids and priestesses, on which their entire society has been based for over ten thousand years.[请求来源]

At one point, a piece of one of Draenor's moons fell into a pool on the far side of the Shadowmoon Valley woods. Such a thing is perfect for use in the dedication of a moonwell to Elune.[8]

The night elves use the word "god" in plural ("Gods help us all"; "May the gods have mercy"), and the Temple of the Moon in Suramar had frescoes and murals depicting Elune and many other gods (actual gods, not demigods) shaping the world.[10] We infer that the night elf religion, though centered around Elune, is actually polytheistic (the druids' reverence of certain demigods supports this). Elune's worship therefore is more like a dominant mystery cult than a monotheism, similar to the religions of Ancient Egypt or Ancient Greece on Earth.

The tauren and the earthen were also known to honor, if not outright worship Elune. The earthen were aware that it was she who gave birth to Cenarius, and were surprised to hear that Ysera was regarded as his mother. It's unknown if this means that the earthen worshiped her, or were merely better-informed about the origins of Kalimdor's demigods.

A tauren myth, the White Stag and the Moon, relates how Apa'ro (Malorne) fled the Shu'halo (Tauren) by escaping into the sky, but was entangled by the stars. Mu'sha saw him and fell in love with him, and agreed to free him if he loved her. Mu'sha's actions appear slightly out of character with Elune as understood by the night elves and the earthen, but it might be helpful to interpret it as a "just-so" story that the tauren used to explain the origin of Cenarius.

During a visit to Darnassus by the draenei prophet Velen, he explained that the kaldorei's description of Elune, as well as the demonstrated powers of the goddess, matched his experiences with powerful naaru. He began to offer advice regarding how to commune with powerful naaru, but Tyrande thanked him for his opinion, then cordially requested that he refrain from making such outlandish claims when in Darnassus or in the presence of Elune's priesthood.[24]

In the RPG Elune is listed as a Healer class and her alignment is Lawful Good.

She nurtured and sheltered the earliest living beings of the world as they awaited the first dawn, giving them the chance to thrive and to grow into the present myriad of life, along with all the possibilities and promises that it entails.[25]

Thus, it was for many centuries, until arcane energy began to leak into the world through the Well of Eternity. Despite her attempts to guide them away, she watched in horror as her spiritual children among the kaldorei were drawn to the Well and seduced by its power. Though her companion Malorne and their child Cenarius joined her faithful among the kaldorei in an attempt to stave off the arrival of the Burning Legion, the demons spilled across the land in a wave of death and destruction that even she could not prevent.

Just as Elune felt that she had once again accomplished her task and brought Azeroth toward a new era of peace, the human kingdoms fell under the corrupting influence of high elven magic, and crumbled into chaos. Shortly thereafter, the orcish Horde came to Azeroth and sparked a new era of warfare that threatens to consume the world like the War of the Ancients did so long ago. Though her kaldorei followers have returned from their time in the Emerald Dream, it has yet to be seen if the moon goddess will take any direct action during this time of trouble.

It's difficult to make the goddess out through the luminescence that surrounds her, only catching glimpses of alabaster skin and long, pale hair, graceful gossamer robes and a platinum circlet upon her brow. Her eyes are brilliant orbs of pure moonlight, and she smiles peacefully upon her worshippers.[25]

Elune is revered by those who worship her as the mother of the world, a scion of peace and a protector of all living things. The majority of the kaldorei strive to follow in her footsteps, though most rationalize their need to resort to violence as the shortcoming of a mortal existence. Even those who worship other powers respect Elune for the unconditional love she gives to all creatures regardless of their beliefs or actions. Though she has never shown herself in physical form on the Material Plane, all the creatures of Azeroth know that were she to do so, it would herald the arrival of a long awaited era of peace.[26]

Elune never engages in combat of any kind, nor does she allow it to occur in her presence. Though she never physically manifests in the world of mortals, when she involves herself in a violent situation, she arrives invisibly and undetected using her song of peace to calm the combatants until sunrise.[25]

Elune is associated with the White Lady.

In the third round of Ask CDev, Blizzard remarked that "Velen has been a prophet of the naaru for many thousands of years, and it’s unlikely that he would propose such a theory without significant evidence and consideration."[32] Community manager Kaivax fueled the mystery a bit further by tweeting "whether or not [Elune being a naaru] is anything other than talk is anyone's guess."

Tyrande Whisperwind, Elune's chosen high priestess, has dismissed Velen's opinion on the matter out of hand.[24] Tyrande's rejection of Velen's claim seems to tie into a notable difference between the naaru and Elune—the naaru reject being objects of worship by mortals,[请求来源] although some may revere them. The moon goddess however has for countless ages empowered a night elven priesthood devoted to worshiping her as a divinity, and in every generation has anointed the most faithful of her worshipers as high priestess of a religion dedicated to her name.

With Elune's mortal avatar dismissing the assertion that the mother moon can be identified as a naaru of major prominence, no certainty exists either way. This does not preclude connections between the naaru and Elune, but it suggests the moon goddess might not merely be one of them.

While proven by Brann Bronzebeard's archaeological research that night elves were descended from trolls (dark trolls are their closest ancestors), and Zanza the Restless, a mortal becoming a powerful Loa, it is highly possible that Elune was once a mortal that ascended into a deity by the Well of Eternity's magics, transforming her to become more closely akin to the Titans' own image since the Well was their creation. This would explain why the night elves bear resemblance to the dryads and keepers of the grove, who themselves have a biological link to Elune herself. In addition, Elune might not be her 'mortal name' as their language had changed over the ages (from Zandali to Darnassian), and since the night elves revered her as the mother of their race, Elune might have been a powerful matriarch of her tribe, which fits the claim of her being the Night Warrior. Night elves sometimes refer to Elune as "the Great Mother",[33] although this is possibly due to her parentage of the revered Cenarius.