艾维娜在翡翠梦境中找到了母亲之树加尼尔。这是芙蕾雅在翡翠梦境中创造的生命之源。 Aviana found her way to G'Hanir, the Mother Tree, a fount of life that was the first thing Freya created within the Emerald Dream. Aviana grew enchanted with it, as it was more than a tree; it was a source of life, healing, and peace. Aviana spent years melding her power into the tree, and soon all winged creatures of Azeroth dreamed of spending the afterlife flying through its branches. Aviana's spirit became tied with G'Hanir, and in time this would have lasting consequences.[2] 阿维安娜找到了通往母亲之树格哈尼尔的路，这是芙蕾雅在翡翠梦境中创造的第一个生命源泉。 阿维安娜被它迷住了，因为它不仅仅是一棵树; 它是生命、治愈与和平的源泉。 阿维阿娜花了数年的时间将她的力量融入这棵树，很快，艾泽拉斯所有有翅膀的生物都梦想着来世能在树枝间飞翔。 阿维安娜的精神与格哈尼尔紧密相连，假以时日，这将产生持久的影响

War of the Ancients 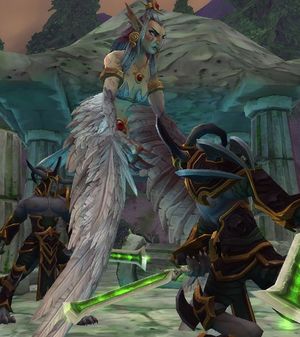 Aviana in the War of the Ancients.

When the red dragon Korialstrasz, trapped in his mortal disguise Krasus, was unable to fly, Aviana gifted him a feather which granted him temporary wings.[3]

During the War of the Ancients, Aviana was one of many Ancient Guardians who came to the aid of the night elves in defense of their world. Though the shock of their attack initially gave them an edge, the endless numbers of the Burning Legion eventually overwhelmed many of them. Aviana was knocked from the sky and Rhonin witnessed her lifeless body fall when a large group of demons attacked her. The doomguard surrounded her and pierced her body with their spears. When Aviana was killed, her realm tree G'Hanir died.[4]

The shock of Aviana's death reverberated through the Emerald Dream, and all the leaves of G'Hanir fell from their branches. Many mourned it, and some succumbed to the temptation of serving dark forces in Aviana's absence. But although she had died, her spirit lingered. As the night elves struggled to rebuild their society in the wake of the Great Sundering, the green dragonflight discovered a gift: A single branch from the Mother Tree, with a single acorn hanging from its leaves, had been left in their care. Alexstrasza of the red dragonflight used the acorn to grow Nordrassil, the World Tree. Malfurion Stormrage sensed that it had been Aviana's spirit that had given the branch to them, and he believed it was best to keep it hidden. Many of Aviana's children had been lost to chaos, and they might be driven to claim the remnant of Aviana's legacy for their new masters. Quietly, Malfurion moved the branch to a safe location within the Emerald Dream. Few knew of its location, but its influence was felt far and wide. For many millennia, the branch served as a stabilizing force for the Emerald Dream, and the land near it was said to be a place of great healing and peace.[2]

The first druids found her body among the carnage, and bore it up to the highest mountain. She was laid to rest just outside the Shrine of Aviana, within a circle of sacred stones.[5]

For ten thousand years Aviana drifted formless in the Emerald Dream while the mortal races continued to worship her; the Druids of the Talon in particular focused their worship around her and learned to take the forms of raven and crows. Her children, the harpies, descended into violence and barbaric behavior, and eventually forsook their parent for other, darker masters, or struck out on their own. Some worshippers believed Aviana to have survived her death at the hands of demons, and others claimed to have actually had contact with her. However, this is unlikely, unless it was through the Emerald Dream.[请求来源] 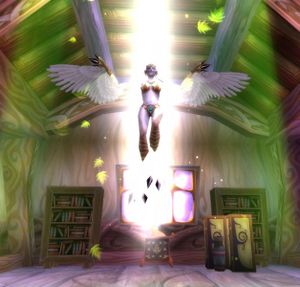 Aviana in World of Warcraft.

Relics of Aviana have been stored in sealed reliquaries in the Stormrage Barrow Dens in Moonglade. Clintar Dreamwalker, the current guardian of the relics, retrieves them for the fight against the forces invading the Emerald Dream.

Ten thousand years after Aviana's death, Deathwing the Destroyer returned to Azeroth from Deepholm. Under his command the fire elementals of Ragnaros marched upon Mount Hyjal, to make way for the Firelord himself to set fire to the World Tree Nordrassil. During their siege adventurers were called from across Azeroth to assist in the mountain's defense. One of the tasks assigned to them was to assist in the resurrection of the demigods, one of whom was Aviana. Besides resurrecting her, adventurers were also assigned to destroy her fallen children, the harpies, who were attacking their mother's shrine. Eventually, the Demigoddess of the Sky was reborn and Aviana returned to the world to help repel the invading fire elementals and to send Ragnaros back to the Firelands.

After Ragnaros was slain, Aviana turned her attention to G'Hanir once again. Times had changed, but her dream of providing a spiritual haven for her kind had not. She set out to restore the Mother Tree to its full glory.[2]

Aviana has taken an interest in the arakkoa, as they too are creatures of the sky and so fall under her domain, and wishes to extend an invitation of peace and give them a place on the Great Bough of G'Hanir. She sends Skylord Omnuron to Draenor, and for helping to retrieve a feather from Skyreach, Omnuron gives adventurers Aviana's Feather to help them gain wings, much like the one she gave to Krasus during the War of the Ancients.

Aviana appears in a ray of light at Hyjal to help battle Destromath, the pit lord who is preventing the cleansing of G'Hanir, the Mother Tree, the branch from G'Hanir that she gave to mortal druids ages ago.[6]

Aviana and several Druids of the Talon appear at the Sylvan Falls in Highmountain. Aviana has created a test of dexterity for new Druids of the Talon, and adventurers can take it as well. Completing the test will reward Emerald Winds.

An Avatar of Aviana appears in the Emerald Dreamway to direct the Archdruid of the Dreamgrove to the Essence of Balance from the Wrath of Azshara, in order to power the Idol of the Wild and commune with Malorne.[7] When Malorne becomes trapped in an Emerald Nightmare recreation of his death at the hands of Archimonde, a figment of Aviana is seen battling demons during the War of the Ancients.[8]

When a demon attack at the Shrine of Aviana turns out to only be a distraction, Thisalee Crow asks Aviana for more information. Aviana reveals that her eyes and ears across the world have told her that Goldrinn is under attack by the Legion at the Stormrage Barrow Dens in Moonglade. Thisalee and the Archdruid of the Dreamgrove go to save him on Aviana's command.[9]

The Idol of Aviana, which grants the Druids of the Talon their Flight Form, is stolen from the Shrine of Aviana on Hyjal by the Legion and used to corrupt harpies with fel. After it is retrieved and cleansed, Aviana blesses the Archdruid of the Dreamgrove with the Archdruid's Lunarwing Form.[10]

Aviana takes the appearance of a large harpy with white feathers covering her body, with gold-colored arms and legs. She wears a gold outfit covering only her groin and breasts, as well as a gold headdress and necklace. The necklace bears a sapphire at its center.

First vision of Aviana after using the Sacred Nectar
A Mysterious Wing Spirit appears above the circle, hazy and indistinct.
Mysterious Winged Spirit说： Come...closer...<class>. They are pulling me away...

After being freed
I am the mistress of the skies, and they who threaten my children shall suffer.

During Quest:Death to the Broodmother

In my domain, fledglings are hurled from the nest as soon as they can stretch their wings. They fly. Or they die.

I have created a test of dexterity for the druids I have taken under my wing. Would you like to attempt it as well?

With my blessing you will be able to float gracefully through the skies... for a time.

I will grant you my blessing, allowing you to float gracefully to the ground. As you fall, attempt to gather as many globes as you can.

Few hatchlings gather more than a couple on their first flight. But most survive to try again.

Should you gather them all in one flight, I may have something extra for you.

Aviana is described as swift and ruthless who personifies the capricious nature of the winds, and her children are no different.[11] and has the title the Reborn.[12]

Aviana in raven form in Suramar during the War of the Ancients.

Long ago, Aviana was a normal raven until she was chosen by Elune to deliver messages from the moon goddess to her son, the demigod Cenarius. Soon she was carrying messages among many of the powers of the ancient world; each power granted the raven new abilities required to carry out her duties until she eventually became an equal among them.[13]

As the kaldorei gathered at the Well of Eternity, Aviana took the form of a night elf and joined their studies of magic. When Queen Azshara built her temple and gathered together her chosen servants to revel in their arcane power, Aviana realized the corrupting influence of magic and returned to Elune's side.[13]

During the War of the Ancients, Aviana would occasionally take mortal form and guide groups away from the doomguard. However, most of the time she flew high above the land gathering information for Cenarius on the movements of the Burning Legion.[13]

Aviana prefers to keep her distance from combat, acting primarily as an observer or messenger. When drawn into battle, she will strike from a distance for as long as possible using her magic and her longbow before changing into raven form to charge and claw opponents while trying to make her way to freedom.[14]

Aviana is described as a tactical spy of Cenarius and messenger of the gods. She is classified as a rogue and sorcerer.[13] 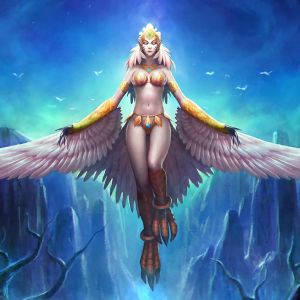 Although this is a Child of Aviana from the TCG, the art is being used to represent Aviana herself in Hearthstone.

In the War of the Ancients Trilogy, it is implied that some night elves were altered and became forest guardians.[请求来源] Some fans speculate that night elves who venerated Aviana may be the harpies. The death of Aviana during the War would have left them without their matriarch, and could explain their now brutal nature (although Aviana herself also hinted to having these streaks).