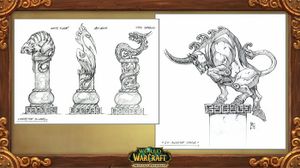 Concept art of pillars dedicated to them. These can be found at each corner of the court on the 永恒岛. 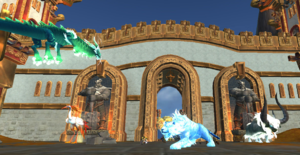 The August Celestials opening the gate guarding the entrance to the Vale of Eternal Blossoms.

Much like the other Wild Gods, Chi-Ji, Niuzao, Xuen and Yu'lon emerged from the great enclaves of life created by Freya during the ordering of Azeroth.[2]

During the 百王时代, 15,000 years before the opening of the 黑暗之门(地理), numerous races settled in the lands surrounding the Vale of Eternal Blossoms. This emergence of life piqued the interest of the four Wild Gods, and though they were troubled by the mogu's constant warfare, they grew to enjoy watching the other races flourish. One race in particular, the wise 熊猫人, developed close ties with Xuen and his fellow Wild Gods due to their peaceful nature. Referring to the four Wild Gods as the "August Celestials", the pandaren developed a system of worship and philosophy centered around the powerful beings.[3]

During the reign of 雷神, the Mogu Empire would seize Pandaria from the celestials. Xuen attempted to protect the people of Kun-Lai Summit from the Thunder King's rule. The battle ended with Xuen's defeat and imprisonment. Niuzao also faced the Mogu in combat, but failed was imprisoned as well. Chi-Ji was captured and used to mock the despairing Pandaren slaves. Lastly, Yu'lon was struck down by Lei Shen's lightning, only surviving by transferring her essence into a jade statue of herself in Serpent's Heart.

The celestials would build temples to train monks in their respective styles after the Pandaren revolution. Niuzao emphasized fortitude in his teachings, the strength to endure any hardship. Xuen taught strength and how physical prowess was not the same as true inner strength. Chi-Ji espoused the importance of hope, even in the darkest of times. Yu'lon spoke of the wisdom of knowing when, and when not, to act.

After being crowned ruler of Pandaria, 少昊 received a prophecy from a 锦鱼人 Waterspeaker that showed a disasterous future for the world. Shaohao then traveled to the four corners of Pandaria, receiving wisdom from each of the Celestials that would help him overcome his negative emotions, become one with the land, and save his people. He learned to conquer his doubt from Yu'lon, his despair from Chi-Ji, his fear from Niuzao, and his anger, violence, and hatred from Xuen. Believed to now be a being of complete harmony by all, including himself, he used his new found power to withdraw Pandaria from the world before the Great Sundering could destroy it. However, even the Celestials did not know this was all the doing of the Sha of Pride, who cloaked Pandaria in mists, isolating it and ensuring a future of stagnation for all who lived within. The Celestials would continue doing their best to protect Pandaria from the Mogu and 螳螂妖 armies for 10,000 years before the Sha of Pride's mist would dissipate following the Cataclysm.

The Sha of Pride's mist disappeared as the 联盟-部落战争 was continually intensifying under 大酋长 Garrosh Hellscream and King Varian Wrynn, with the former becoming more prideful and tyrannical and the latter becoming more fair under the influence of his son. As General Nazgrim and Admiral Taylor led their forces against each other in the Jade Forest, the Sha Primes began to erupt across the continent.

The Sha of Doubt attacked the 青龙寺, corrupting her servants and priests until killed by adventurers, as Yu'lon believed they would. Yu'lon proved kind and forgiving toward the outsiders and guided them toward the Valley of the Four Winds. The heroes would eventually come across the 朱鹤寺, where Chi'ji had succumbed to the 惘之煞. Aided by Anduin Wrynn and Koro Mistwalker, the Sha of Despair was vanquished and Chi'ji thanked the brave heroes, promising them his support. He would later allow adventurers to participate with his monks in training at the Cradle of Chi-Ji. Later, Xuen would become convinced by the Horde and Alliance that the sha must no longer be contained, but faced and defeated, and that the Vale of Eternal Blossoms should be opened. After the four celestials united and opened the gates of the Vale, the Shao-Tien Mogu rushed the vale as well, stealing the three treasures of the Thunder King. The celestials would later grant their blessings to the heroes and the Golden Lotus to drive them back and kill their leader Zhao-Jin the Bloodletter. As the 惧之煞 continued to use the 螳螂妖 and their empress as his puppets against the Pandaren, Niuzao was besieged by the Shan'ze Mogu led by the Thunder King's herald Shan Bu. The 影踪派 receive aide from the heroes, free Niuzao from Shan Bu's grasp, and force the Mantid and Mogu back. The celestials (or at least their essences) aided in the fall of the Thunder King during the Twin Consorts battle. After the remaining Sha Primes, not counting Pride who had yet to reveal itself, are killed, the young black dragon Wrathion sought wisdom from each of the celestials in his quest to better understand how to prepare the world for the coming conflict with the Burning Legion. Finally, after the 决战奥格瑞玛 had ended, the August Celestials joined the heroes and 游学者周卓 to witness 少昊 planting a magic tree in the Vale of Eternal Sorrows, providing hope that the vale would one day heal. Speaking with Yu'lon afterward, the player finds that Pandaria will no longer have to live in fear of the seven breaths of 亚煞极, declaring the threat of the Sha to be over.