很久以前，泰坦守护者芙蕾雅用Fu Zan the first tree的一根树枝制成了她的手杖，后将其作为礼物赠予玉珑，玉珑后又将其送给美猴王。The hozen hung his most prized possessions from the staff, which he carries with him to this day.[1]

Some time later, the Monkey King lead a small army of Royal Jibstabbers against a mogu known as the Jade Warlord, his Disciples of Jade and several large quilen.[7] Battling inside the Tomb of Conquerors, the two generals dueled each other one-on-one. The entire battle ended with both themselves and their minions becoming petrified in jade.[8] They would remain this way for the next 10,000 years. 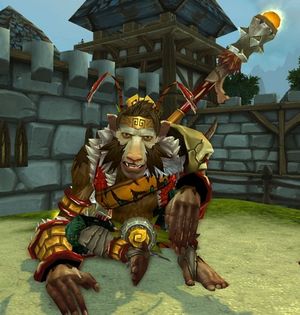 The Monkey King in WoW.

After hearing about the Horde's acquisition of the Divine Bell, Prince Anduin Wrynn began searching for a means to counter its power. His research has led him to an item known as the Harmonic Mallet. The Harmonic Mallet was last seen in the hands of the Monkey King. The tomb of the Monkey King is located in Tomb of Conquerors, where he and his mogu adversary are frozen in jade.[8] Anduin discovered an incantation to release him from the jade imprisonment but it would release the Jade Warlord as well. After the Alliance champion defeats the Jade Warlord, the Monkey King asks the champion to solve his three riddles in exchange for the whereabouts of the Harmonic Mallet: an instrument used by the Pandaren rebels in ancient times to counter the mogu's Divine Bell by turning its power into pure harmony. After solving his riddles, the Monkey King revealed that he had to to break the mallet and sent his minions to hide its pieces in the far away corners of Pandaria in order to prevent it from falling into mogu hands.

The Monkey King can later be seen on the Timeless Isle overseeing the battles in the Celestial Court.

The Monkey King assists Brewmaster monks in obtaining his staff, Fu Zan, the Wanderer's Companion, from the Temple of the Jade Serpent. He later travels to the Wandering Isle and joins with the Order of the Broken Temple.

In Karazhan, he beats down Barnes and announces the play: Wikket.