纳特帕格（Nat Pagle）是全艾泽拉斯世界最著名的渔人之一。 Having licensed his own line of fishing equipment, Nat can be found in myriad locations all around the world, offering training to aspiring fishermen who seek him out.

He states he has no particular interest in fishing, but has been fishing for 20–30 years. He also says that fishing is "a great excuse to drink ... heavily", and therefore he enjoys the occasional drink now and then.[1] 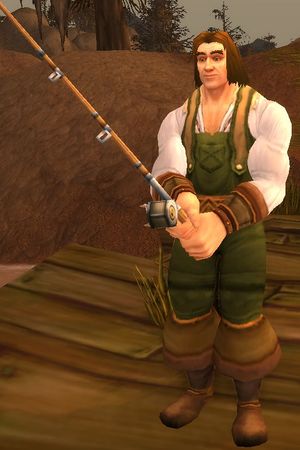 Nat Pagle gives the quest Nat Pagle, Angler Extreme. A fishing skill of 225 and a minimum level of 35 are required to start the quest. After Patch 3.1, this quest is no longer required to attain the Artisan fishing level. The quest now offers a special superior-quality fishing pole instead. If you already completed the quest, you can visit Nat Pagle to receive this fishing pole.

Prior to the Cataclysm expansion, players could obtain the quest Quest:Nat's Measuring Tape when opening a Battered Tackle Box containing the tape, found at Pagle's Pointe in 祖尔格拉布(旧版). This quest involved returning the tape to Nat. When completing this quest, he said it is his favorite measuring tape and shares information about the hydra Gahz'ranka.

Also prior to Cataclysm: In another repeatable quest given by Nat, after completing "Nat's Measuring Tape" and having a fishing skill of 300 or higher, he gave instructions for summoning Gahz'ranka at Pagle's Pointe. He also sold the lures needed for summoning Gahz'ranka. These Mudskunk Lures had to each be filled with 5 Zulian Mudskunk in order to be used. Zulian Mudskunk were caught in Zul'Gurub itself by fishermen with 300 skill or more. This 祖尔格拉布(副本) boss encounter was optional and could be done only once after every reset of the instance. Note: As of Patch 5.4.1, Pagle continues to offer to tell the player how to fish up Gahz'ranka and still sells the lure, even though Gahz'ranka was not part of the new Zul'Gurub instance after Patch 4.0.3 and thus can no longer be caught.

In-game, various items besides the ones in Nat Pagle's line of fishing equipment (below) can be found. Most notorious is the book Nat Pagle's Guide to Extreme Anglin'. It is by this book that Nat Pagle was first connected to the quest for the legendary sword Ashbringer. The last readable page contains only the words: "... And so that's where you'll find the legendary sword of the Scarlet Highlord, Ashbringer. Ain't it amazin' what you run into in an ordinary day of fishin'?"

In the 逃离敦霍尔德 instance in the 时光之穴, Nat is seen fishing alongside Hal McAllister in Southshore. He talks about his dreams of events that will happen in the future, like Tarren Mill being overrun by the Undead, Arthas being possessed by the Lich King and killing his father, Thrall's escape from Durnholde Keep, and Archimonde being killed by "small lights". (In that dream, he was a female 暗夜精灵.) He also describes two gangsters named Tigule and Foror inventing ice cream, and eventually entering a dimensional gate. McAllister scoffs at every dream, which ironically all are to come true in real life.

The Gods of Zul'Aman

Starting in Patch 2.3.0, Nat is involved in the Take Down Tethyr! quest line, started by Sergeant Amelyn (This Old Lighthouse), which ultimately has players fighting Tethyr, a Level ?? Elite (Boss) Sea monster, with the help of some guards from Theramore.

Nat's appearance begins with the quest Is it Real? offered by "Dirty" Michael Crowe. Nat offers Nat's Bargain. After accepting the quest, apply the Pagle's Fish Paste, Extra Strength he gives you, then swim southwest to the wrecked ship. Swim around until a level 37 Lurking Shark aggros, then swim back up to Nat to complete the quest.

After completing Nat's Bargain, he offers Oh, It's Real directing players to Major Mills near the docks of Theramore.

Nat Pagle, as every fisherman, is very sturdy and remains untouched by the Shattering and Deathwing. Also, his Arcanite Fishing Pole that he donated for Booty Bay's fishing contest is now more unique in terms of look.

Nat helps defend Sethria's Roost on Mount Hyjal against the minions of Ragnaros during the quest Quest:The Protectors of Hyjal and also occasionally makes an appearance on the 暗月岛 at the Darkmoon Boardwalk overlooking the sea. 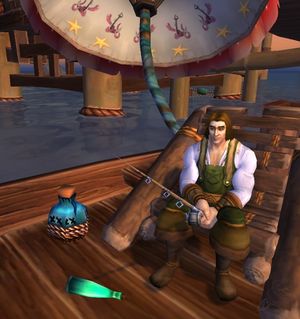 A fellow angler I see! I have a variety of gear from these local fisherman, just let me know what you need!
你好啊，钓友！你来这里多久了？我和我的搭档“大钩”山南海北地到处寻找大鱼！
我们偶然来到这里，当地人十分友好，又是给补给品，又是好酒好菜地招待，所以我们打算留下来啦！
我想要看看你卖的货物。
请让我接受训练。

Nat Pagle is asked to join the Garrisons of the Horde and Alliance in Frostwall and Lunarfall from Pandaria. He can also become a follower.

He can also be seen watching fights between garrison commanders in the Coliseum of 悬槌堡.

What are you waiting for? Let's catch some fish!

I want to browse your goods.

He is also involved in the following daily quests on Pandaria which increases his reputation by +600:

In order to have Nat in your Garrison, you must complete the following: 模板:Nat Pagle, Master Fisherman

Once he is a garrison follower, additional quests also increase his reputation by +350 and you can collect Nat's Lucky Coins:

These are the items either used, launched, or licensed by Nat Pagle. Most of these items give +fishing skill and are obtainable as a drop or quest reward.

Other items connected to Nat Pagle are: 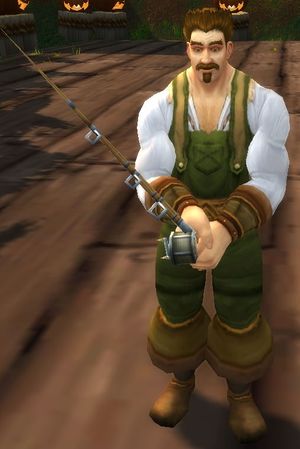 Nat is found in Old Hillsbrad Foothills as an uninteractable NPC. He is much younger and he has not even grown a mustache yet. He is Level 38 instead of his normal Level 45. He is found fishing at the end of the Southshore dock beside Hal McAllister, with whom he has some amusing conversations about his vivid dreams.

Nat Pagle说： Out of nowhere, some 300 foot tall demon or somethin' walks up and stars climbin' the tree...
Nat Pagle说： And if that weren't crazy enough, that big demon gets killed by a bunch of little floating light things... Oh, I was also a female elf in that one... Yep...

Nat Pagle说： Well in this dream, they somehow end up inventing something called ice-cream and flavoring it with strawberries... Well, long story short, they end up striking it rich!
Nat Pagle说： If that weren't crazy enough, they decide to quit ice-cream business and become adventurers... They travel all over the place and finally disappear into some portal. I woke up in a cold sweat after that one...

Nat pats his brow dry.
Nat Pagle说： But tragically, Arthas is consumed by the evil and becomes evil himself...
Nat Pagle说： Well, he comes back to the king all pretendin' to be nice, draws his sword, and runs the king through, elbow to... well you know... kills him on the spot.
Hal McAllister shakes his head.

Nat Pagle说： And people from all over the world come to pay me homage... and learn to fish.
Nat Pagle说： I'm like some kind of fishing god...

Nat Pagle说： Tarren Mill is destroyed by some crazy force of undead and forever more becomes an enemy to Southshore.
Nat Pagle说： Could ya imagine such a thing, Hal? Could ya?

Nat Pagle说： He ends up destroying the whole keep, freeing all the orcs we're keeping in the camps, and rising to power as the king of orcs... 大酋长 or somethin'.
Nat Pagle说： Crazy, isn't it?

Each time, Hal McAllister finally answer him one the following: