I don't even know what you're fighting for anymore.[8] 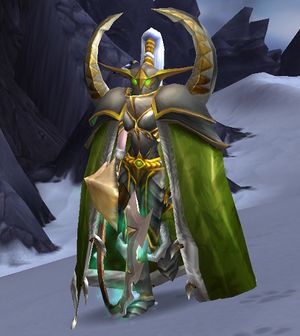 科达娜参加了 Assault on the Dark Portal 任务，和艾泽拉斯其他阵营的首领一起，成为第一批进入平行宇宙的英雄。 When the vanguard attacked the Iron Horde, she was overlooking the fight. After the Portal was disabled, she accompanied Khadgar and his group into the eastern part of the jungle, running through the camps of the Iron Horde. Once she fought back in Kargathar Proving Grounds and escaping the Umbral Halls, she joined the adventurer in battling the blackrock orcs. When the area was flooded, she fought against the orcs under the Worldbreaker. After the Dark Portal collapsed, she left with Khadgar on the ships of the Iron Horde.

In Shadowmoon Valley and Frostfire Ridge she worked closely with Khadgar to hunt down the Shadow Council. In Shadowmoon, Cordana and the commander entered the woods near Gul'var and caught demon All-Seeing Eye. She ordered Khadgar not to go to the Shadow Council's settlements. In Frostfire, she asked the Horde commander to speak with the Frostwolf orcs in Throm'var in their behalf. When Khadgar was nearly assassinated by Garona Halforcen, Cordana fought her off and forced Garona to flee.

Cordana later joined Khadgar at Zangarra, the Kirin Tor's base in Talador. As Khadgar searched for Gul'dan, the warlock once again sent Garona. This time, the assassin succeeded in stabbing and poisoning Khadgar. After Cordana recovered, she ordered the commander to hunt Garona down while she stayed with the archmage and called for help. When the commander caught Garona and returned to the tower with her antidote, Khadgar refused healing magic and instead told Cordana to stitch him back up so he could return to tracking Gul'dan.

After the death of Blackhand, Cordana helped Khadgar break Garona free of Gul'dan's control. She stopped Khadgar's initial attempt to interrogate Garona about her master, seeing it as torture.[8] Khadgar agreed and backed off, sending the commander to get a Shadow Council Orb of Dominion. After using it to break Gul'dan's hold over Garona's mind, Cordana took the orb away to destroy it. She stayed behind in Zangarra while Khadgar and Garona traveled to Bladefury's Command to apprehend Gul'dan.

Due to the Orb of Dominion's influence, Gul'dan was able to corrupt Cordana from afar. When the commander brought her a number of Tomes of Chaos from Hellfire Citadel to destroy, she instead attempted to use the fel magic within them to take the ring Khadgar had given the commander. The commander was forced to fight her until she retreated through a demonic portal, vowing that the Burning Legion would soon come to destroy Azeroth. Khadgar was visibly stricken with grief at her betrayal.

The night elf, Cordana Felsong steps from the shadows as if emerging from a dark pool, her delicate features forming in front of those she encounters. Tall and lithe, she wears no armor but carries an impressive silvery blade as if it weighed nothing. Her cool gaze sweeps across them, and they feel as if they have been judged - and barely deemed acceptable. Cordana uses her spell-like abilities to appear and disappear within shadow. She casts silence first, to unnerve her opponents and to prevent spellcasters from using verbal spell components. Then she targets one foe and appears from the darkness nearby, attacking swiftly and retreating for another pass.[12]

She might have told Gul'dan about the Vault of the Wardens and maybe even about Illidan after she was corrupted by the orb.