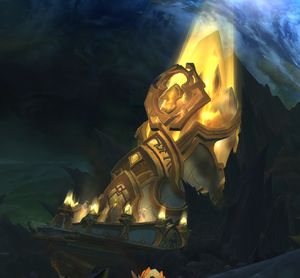 在与燃烧军团进行了数千年的战争后，圣光军团准备向恶魔的大本营——阿古斯发动最后的进攻。 When Illidan Stormrage used the Sargerite Keystone to connect Argus with Azeroth, Azeroth's Armies of Legionfall traveled to Argus aboard another dimensional ship, the Vindicaar. Soon after the Vindicaar arrived the Xenedar did as well, only for it to be immediately shot down by the forces of the Legion.

It would later be discovered that Turalyon, High Exarch of the Army of the Light, had survived the crash. After an adventurer from Azeroth united with him, and later with his wife Alleria Windrunner, the three traveled to the crashed Xenedar to retrieve Xe'ra, the naaru who had previously sent her sentience core, Light's Heart, to Azeroth. Xe'ra was brought to the Vindicaar, as the Army of the Light secured the ship to avoid it falling into the Legion's hands.[1]

When Velen saw the ship Xenedar, he immediately recognized it. It is unknown how he knew its name. He may have seen learned it in a vision, encountered the ship in the past, before the draenei came to Draenor, or simply told about it by Lothraxion who traveled to Argus with him.