"Hope is the sun behind a stormy sky.
Ever in the heart, but veiled to the eye."[1]

During Lei Shen's conquest of Pandaria, he and the mogu overpowered the four August Celestials. Chi-Ji was bound in chains and paraded in front of the despairing pandaren slaves.[4]

It is said that following the pandaren revolution, Chi-Ji placed the rainbow in the sky, so that pandaren would know not to fear the storms any longer.[5]

When Shaohao began his journey across Pandaria, at some point the emperor fell to marsh. Without hope, Chi-Ji flew above him and made him realize that he need to hope once again to save himself. 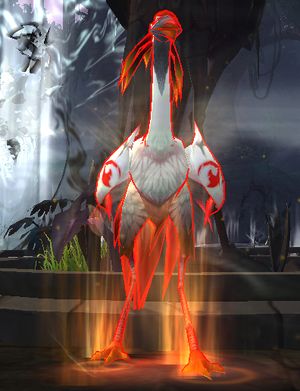 Shortly before the emergence of sha, Anduin Wrynn trained with him for a short time. Thanks to the efforts of Anduin and the champions of the Horde and the Alliance, Chi-Ji and his Temple of the Red Crane were freed of the corruption of the Sha of Despair.[6]

Chi-Ji and the other three August Celestials opened the gates to the Vale of Eternal Blossoms.

Chi-Ji helps the adventurer atop the Pedestal of Hope in defeating Ellia Ravenmane, who has forsaken Chi-Ji's hope and become possessed by a sha. After the fight Chi-Ji thanks the adventurer, telling them that they embodied the Way of the Crane.[3]

Chi-Ji also granted his powers to an adventurer who was about to kill Zhao-Jin the Bloodletter.

At some point, new members to the Golden Lotus were about to be chosen. Chi-Ji appeared in the Shrine of Two Moons and informed Dezco that one of his newly kids will became a part of the defenders of the valley. Dezco however did not want to leave his kids and chose to leave the valley. During the attempt, he was attacked by the Shao-Tien mogu. As he battled, he crushed Cloudhoof and Redhorn got poisoned. As he lowered him to a pool, Chi-Ji appeared and healed the kid but left before Dezco called for help for Cloudhoof. 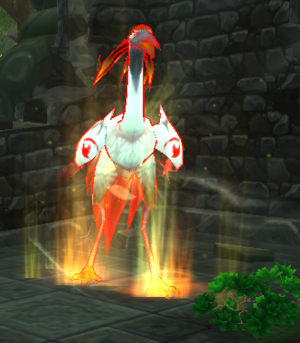 The trial of Chi-Ji

In A Little Patience, Chi-Ji watches King Varian Wrynn as if the scenario were a test, asking "Will the wolf behave as a warrior... or a King?" At the end of the conflict, Chi-Ji seems satisfied with the king's performance, but states that there will be more trials ahead, perhaps referring to the Trials of the High King.

As part of Wrathion's legendary journey, he and an adventurer visited the Red Crane in order to get his blessing.

The trial of Chi-Ji is a test of hope. Uncertain of the future of his people, Emperor Shaohao sought out the great Red Crane. The Great Crane challenged Shaohao to find the hope within himself, and cast off his uncertainty. Once the Sha of Doubt was vanquished, the Emperor became a beacon of hope for his people. To pass the trial of the Crane, warriors must believe in hope, even in the darkest of days.[7]

During the quest Quest:Why Do We Fight?, the celestials alongside the ghost of Shaohao, Lorewalker Cho and Adventurer gathered around to begin to heal the Vale. As he stands before the tree, he knew in the end that there was still hope in this world.

Aftermath
This tree stands as a symbol of hope. Hope that the land might in time be healed and made stronger by your deeds.

Chi-Ji and other Celestials chose to hold a trial involving the members of the Alliance and Horde rather than sentence Garrosh Hellscream among themselves. During the trial, Chi-Ji took the form of a blood elf as a show of respect to the gathered races.[8]

The Burdens of Shaohao Part 2—Despair
Chi-Ji: Why do you struggle so?
Shaohao: I have lost my friend, my kingdom! It is hopeless!
Chi-Ji: Your friend is not lost. You are.

Quest:Celestial Blessings
Wrathion说： Great Red Crane! Hear our plea.
Wrathion说： My champion and I seek your blessing of Hope.
Chi-Ji说： My my, the child of the Worldbreaker, proof that none are beyond redemption. I am honored by your visit.
Chi-Ji说： Tell me, Son of the Earth-Warder: What is the nature of hope?
Wrathion说： Hope is...a belief of a better tomorrow.
Chi-Ji说： You speak, but doubt your own words.
Wrathion kneels
Wrathion说： ...Great Crane. You have not seen what I have seen.
Chi-Ji说： You underestimate me.
Wrathion说： ...the fire that once burned the sky will return. It is inevitable. The Burning Legion WILL find Azeroth.
Wrathion说： Seas of blood, cities in ruins! Who are we - one divided world - to stand against a legion?
Wrathion说： You speak of hope. Believe me, the thinnest sliver of belief that we might somehow survive the coming devastation is all that sustains me.
Chi-Ji说： Rise, son of Deathwing. I will give you my blessing, for you need it more than any I have ever met.
Wrathion stands
Chi-Ji说： I challenge you not to think of hope as a vague and unimaginable future.
Chi-Ji说： Live EVERY day with hope in your heart. In doing so, you CREATE the future you dream of.
Wrathion说： ...thank you, Great Crane.

Time-Lost Shrine
"Hope's fire grows when the flames come together."