Kun-Lai Summit originated as a place created by the titans. The mountains of this land were shaped by Mogu hands before they succumbed to the Curse of Flesh. Eventually, Kun Lai Summit was heavily contested along with the rest of Pandaria by several different Mogu clans. Soon after, many different races of Pandaria, including the Mountain Hozen, Jinyu, and even early Pandaren farmers came to inhabit the region. The Summit was watched over by Xuen, the White Tiger, who swore to protect the races of Kun Lai from outsiders. When 雷神 and his mogu legions marched upon Kun-Lai Summit, he gave the citizens the chance to remain free. A single challenger was meant to face Lei Shen. If he won, Lei Shen would leave the lands alone. However, if he lost, the citizens of Kun-Lai Summit would bow before the Thunder King. His challenge was accepted by Xuen, and their battle raged for thirty days and thirty nights. In the end, Lei Shen was triumphant, and the lands of Kun-Lai Summit were shortly thereafter conquered and enslaved by Lei Shen, with minimal opposition.

After the Pandaren revolution, and the 赞达拉入侵 that followed, Kun-Lai Summit became a free state under control by the 熊猫人帝国 from their seat in the Jade Forest.

The lands have been peaceful for the past ten thousand years, until outsiders arrived in Pandaria. The war between the Horde and the Alliance and their negative emotions have awoken the Sha. Even worse, the mantid to the east have forced the yaungol out of their homes in 螳螂高原 to breach the 蟠龙脊 in order to break through and invade Kun-Lai. The Yaungol invasion has left the Pandaren farmlands occupied and devastated. Even worse, the yaungol invasion has empowered the Sha even further. The Shado-Pan Monastery has come under attack by the Sha of Hatred from within and the 怒之煞 has risen in the South with the heightened negative emotions.

To the north, Zouchin Province on the coastline of Kun-Lai has been experiencing very peaceful times for several years. That was until a large Zandalari army led by Prophet Khar'zul and Gara'jal the Spiritbinder arrived on the shores and assaulted the Pandaren villages. A large amount of the province's pandaren population was slaughtered in the process, and even worse, the Zandalari have regained their ancient alliance with the mogu through the mountains of Kun-Lai above Zouchin Province. The Mogu have begun animating several terracotta and stone warriors to fuel their growing army which they intend to use to reclaim Pandaria. The Zandalari have also gained possession of the body of Lei Shen, who they intend to resurrect. Taking him to the 末劫岛 along with their Mogu allies, Prophet Khar'zul succeeded in resurrecting the fallen First Emperor. The Zandalari then launched a full scale assault on 卓金村, while the Horde and Alliance managed to help the Pandaren villagers win a Pyrrhic victory over the rebels. Most of the Mogu and Zandalari in Kun-Lai have since fled with the Thunder King to his island citadel, where they intend to unite into a single army commanded by Lei Shen to reconquer Pandaria for him.

Seeking the Divine Bell Warchief Hellscream orders Horde forces to enter the region and discover its location. The Alliance is also seeking the bell, determined to prevent the Warchief from acquiring the Mogu artifact. In time both sides learn that the bell is hidden within the 寇茹废墟. However in the race between factions to reach the artfaict, the Alliance is victorious.

Vol'jin: Shadows of the Horde

After being attacked Vol'jin is rescued by Chen and taken to recover at the 影踪禅院. While there Vol'jin is plagued by visions which warns him of a Zandalari attack on the mainland. Aided by Chen, Tyrathan Khort, and Shado-pan monks Vol'jin leads a strike against the Zandalari that ends up baiting them to the monastery where The Thirty-three are successfully able to beat the invaders back, despite the losses suffered.[1]

Zandalari and Mogu invaders have landed on the shores of Kun-Lai to begin the invasion of Pandaria which will restore Mogu rule.

Kun-Lai Summit is no doubt one of the coldest places in all of Pandaria. The southern lands are much more vibrant and warmer, reminding somewhat of autumn, while the lands of the north are much more barren and most of them covered in snow. This is because the mountains are actually the highest in all of the known world of Azeroth. The only way into the summit that is not sealed off by the Great Wall is through the Hidden Pass. The key trade route of Kun-Lai is the Burlap Trail, that is run by the Grummles. Many yaungol warmongers are constantly trying to expand their territory, having been driven away from Townlong Steppes by the Mantid and desperately looking for a place to set up their new homes. In the mountains, many ancient Mogu ruins and crypts can be found, and the Mogu themselves, along with the Zandalari trolls that have recently arrived there are uncovering their secrets. The pandaren have two major holdouts in the region - Temple of the White Tiger and Shado-pan Monastery. The latter is endangered with the rampage of the Sha, that have been set free by the tremendous surge of negative emotions caused by the great conflict between the Alliance and Horde. On the northern shores, local villagers are endangered by the Zandalari that have made their base of operations on a small island and ruins along the coast. 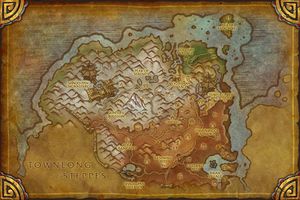