The Sunfury were led by Master Daellis Dawnstrike to destroy the Kirin'Var Village,[5] but the overall army was led by Kael'thas Sunstrider himself.[6][7] During the invasion of the village they detonated a mana bomb, which caused a rift in the Twisting Nether and mana creatures appeared around the region.[6] Master Daellis Dawnstrike fought in the front lines killing many Kirin Tor mages.[5] Spellreaver Marathelle looted the Heliotrope Oculus and [8] Summoner Kanthin claimed Glacius as his trophy.[9]

Once the destruction was done, Vargoth was sealed with a magic that forbids passage to anyone of the Kirin Tor [10] and Kael'thas took the Sigil of Krasus from him and gave it to Spellbinder Maryana.[11] Finally he left Ar'kelos as a guardian to guard Vargoth's prison.[12] Kael'thas' forces retreated to Sunfury Hold where some Sunfury were left stationed,[13] including Spellreaver Marathelle.[8]

The Sunfury Magisters carry mana crystals. Exposure to these, combined with Bloodgem Shards, greatly magnifies the addiction to magic of the blood elves; Kael'thas has most of his army drunk with these crystals.[14]

The Sunfury blood elves were in an alliance with the Zaxxis ethereals, but the ethereals cut off relations with the Sunfury[15][16][17] and went into business for themselves.[17]

They lost the manaforge Manaforge Ultris when it was attacked by mana creatures.[18] 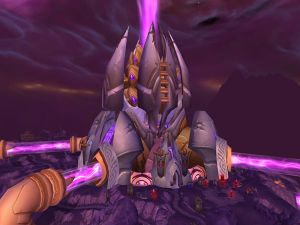 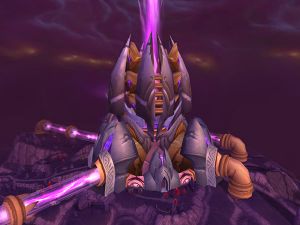 The Sunfury army holds control over four manaforges.[19] The Scryers were sent to investigate them[20] and the Aldor went as well as they couldn't ignore the threat that they present.[21] They were sent by High Priestess Ishanah.[22] The manaforges threatened the region with blowing up within a few months, probably taking much of Outland with the explosion.[23][24]

Captain Arathyn, leader of a ballista team outside of Manaforge B'naar, held the B'naar Personnel Roster.[20] The Aldor defeated their magisters and bloodwarders[25] while the Scryers kill Arathyn and managed to obtain it. With this information the Scryer began to assassinate Sunfury blood elves,[26] but not any blood elf that could be easily replaced. They targeted the brains of the operation: the Sunfury Warp-Engineer and the Sunfury Warp-Master who oversaw the retrieval of a so called "warp-energy" by the manaforge and its delivery to a remote destination via a system of underground pipes and the Sunfury Geologist.[27] Meanwhile the Aldor went to investigate if the manaforges were made with naaru technology.[26][28] They discovered that it was a modified technology of Tempest Keep,[29] and that the warp were highly dangerous as the naaru technology wasn't supposed to be used so close to the land.[30] However, as most naaru constructs, the manaforges had a safeguard that allows them to be permanently disabled in case of emergency. This information was shared with the Scryer.[29]

Manaforge B'naar was protected by blood elves and even arcane guardians,[31] with Overseer Theredis in possession of one acces crystal used to deactivate Manaforge B'naar. Both Aldor and Scryer went and killed Theredis and shut it down.[29][32]

Arcanist Ardonis was the leader of Manaforge Coruu,[18] but Overseer Seylanna held control over access crystal.[19]

By this time Manaforge Duro went under heavy attack by arcane wraiths,[33] the same mana creatures they lured with their mana bomb,[6] because they wanted the harvested energy and the situation went out of control. Commander Dawnforge and Pathaleon the Calculator took many troops from Manaforge Coruu, even when it had very few blood elves to defend themselves, to go and defend Duro.[33] Caledis Brightdawn managed to infiltrate Manaforge Coruu, and the Scryers managed to overhear the information of Manaforge Duro,[18] and gave that information to the Aldor.[19]

The blood elves activities in Coruu sent waves of mana elementals to Kirin'Var Village, although adventurers helped the ghosts of Kirin'Var more waves continued to appear,[34] this creatures were also attacking the Sunfury blood elves, so they began to develop techniques to destroy them.[35]

Finally Kirin'Var was saved as they activated a shield with the Sunfury's stolen technology and destroyed the new mana creatures who tried to enter the village.[36]

Then the attack commenced against the Manaforge Coruu: The Aldor attacked the arcanists and researchers.[37] Meanwhile other Aldor and Scryer adventurers used the distraction of the Sunfury caused by the mana creatures and managed to destroyed the manaforge, killing Overseer Seylanna[19][38] alongside Spellbinder Maryana.[11] During the battle it was discovered that the Sunfury had received outside assistance to understand the Naaru technology.[39][40]

At that time, other adventurers sent by Custodian Dieworth attacked Sunfury Hold, where they killed their archers,[13] flamekeepers,[41] their leader Master Daellis Dawnstrike,[5] Spellreaver Marathelle,[8] and burned up their ballistae and tents.[41]

The Consortium gave the Sunfury blood elves a shipment of Box of Surveying Equipment to Manaforge Duro but the blood elves refused to pay, but during the confusion of the attack of mana creatures adventurers sent by the ethereals managed to repossess the shipment. After this events it was unofficially ended the dealings between both organizations.[42] But some time later, Ambassador Solannas was sent by 凯尔萨斯·逐日者 asking for the Ata'mal Crystal to Nexus-Prince Haramad, but decided to give the crystal to the naaru instead and end the dealings with the Sunfury. For this actions Solannas and his guards attacked the ethereals but were killed by Haramad himself.[43]

Spymaster Thalodien[44] and Anchorite Karja[45] were worried because of the lost of control in Manaforge Duro,[44] as the explotion of the manaforge could threaten all of 外域.[45] The Scryers used the mana beasts' attack to Manaforge Duro and fought against the Sunfury at the same time, slaughering many blood elves.[46] And then, both factions sent adventurers to deactivate the manaforge, they killed Overseer Athanel.[44][45] During the battle Summoner Kanthin was also killed at Archmage Vargoth's request.[9] After this Archmage Vargoth obtained all the necesary items to release from his prision he just needed to defeat Ar'kelos, an arcane guardian left by Kael'thas, with help from adventurers he managed to defeat the golem, but still needed a key held by a 血警卫（部队） commander.[12] By destroying Manaforge Duro just one manaforge was left.[47]

Discovery of the Burning Legion's alliance 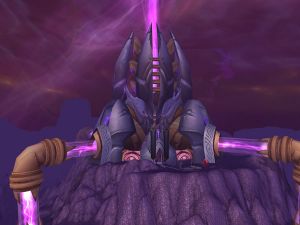 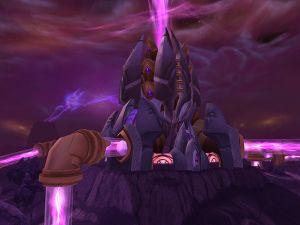 Manaforge Ara was the last manaforge active, it was oversaw by Overseer Azarad,[47] they recruited blood elves from 奎尔萨拉斯 and reincorporated them into their ranks.[48] Magister Theledorn betrayed the Sunfury and offered assistance to the Scryers, who sent adventurers to check if Theledorn wasn't a double agent,[49] but the contrary happened, thanks to him they were able to obtain evidence of the alliance between Kael'thas' forces and the Burning Legion.[50] The Scryers shared the information with the Aldor,[51] who sent ten troops to attack the Manaforge, but only one survived,[52] the survivor was reinforced and managed to kill some shivarras and mo'args.[51] Nether-Stalker Oazul, an ethereal of The Consortium, went to attack the blood elves because they were destroying the land with the manaforges, targeting the nethermancers, who stabilize the flow of power.[53]

The Sunfury had also a mine below Manaforge Ara, the Trelleum Mine; since the destruction of Manaforge Ultris this was their last source of materials to run the manaforges. As the ethereals of The Consortium wanted to take the mine for themselves, they sent adventurers to defeat the foreman,[54] but when he was found he revealed that he had been demoted, and, in truth, Overmaster Grindgarr held control over the mine and the foreman was no longer an enemy of the ethereals. The overmaster was defeated and the ethereals learned that the Sunfury were allied with the Burning Legion and that there were some blood elf defectors.[48]

Meanwhile, the Scryers didn't know about the alliance with the Legion thinking that the overseer of Manaforge Ara was a blood elf. They went to deactivate it but, when they proceded, they found out that the overseer was, in truth, a 愤怒卫士 and that the Sunfury were working with the Burning Legion, a very bad news to the thousands of blood elves travelling from Azeroth.[47] Even with the demons protecting the manaforge both, Aldor and Scryers managed to deactivate the last manaforge,[47][55] saving Netherstorm and all of 外域 from a possible explosion.[23][24]

The Scryers sent word from this alliance between Kael'thas and the Burning Legion to Voren'thal the Seer.[47][56] 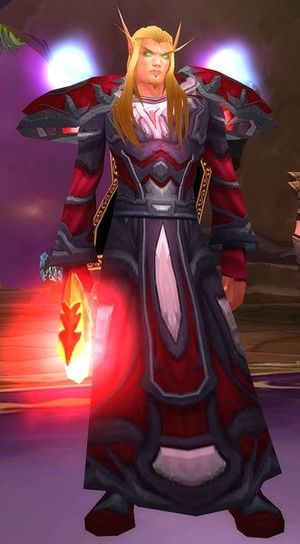