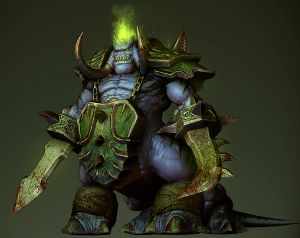 When the 冒险者s sent by 破碎残阳联军 enter the 太阳之井高地 and approach the Den of Iniquity, a room overlooking the 死亡之痕, Brutallus fights and kills 玛蒂苟萨. He was then fought and eventually killed. His fel blood seeped into the ground and into the body of Madrigosa, raising her as 菲米丝.

As it is plainly obvious, Brutallus is a massive gear check (in more than one way).

The strategy to this fight is very simple: Make your raid into a "V" shape, with 1 tank at each top end of the V and respective soak groups behind him, and have the melee group at the vertex of the V so that they are always behind Brutallus (no parrying). Each soak group takes 3 meteor slashes, the other tank taunts, and that group takes 3 meteor slashes, rinse repeat.

For Burn, that person must leave the group and run to a spot where they won't get slashed but be healed for the debuff, which everyone should be very spread out so that the burned person does not cause Burn to happen to other players.

The maximum amount of healers you can bring to this raid is 8, as 9 healers will almost certainly not get you enough DPS to kill him. If your healers can do it, bring only 7 healers.

It should be noted that the fight—more specifically Meteor Slash—was slightly changed in 2.4.1. Its range was 30 yards but is now far longer, most likely to stop an exploit. Because of this, your positioning will have to be a bit more delicate to make sure a burned player isn't in any way in the cone of meteor slash.

The toughest part of this fight is the class balance of the raid. Warriors (and Rogues) can do extremely high DPS, especially with Warglaive sets giving a very big bonus to this demon boss, but too many and you won't have enough soakers. Shadow priests help out a lot with Vampiric Embrace healing their group (the soaker groups), but their DPS is "capped" at 1400-1500 DPS under normal raid circumstances, even with the best gear possible. It will be up to you and your guild to find the best balance for killing Brutallus.

Using destruction potions/haste potions for the DPS is pretty much required, and your melee should have Elixir of Demonslaying over Flasks of Relentless Assault, full raid consumables, including food and buffs (you will need every single buff you can get to increase your healing and damage), even if it includes having a discipline priest waiting outside the instance buffing your casters with imp spirit and that extra paladin for the extra blessing.

Things in this fight you don't have to worry about:

Damage on the tanks is extremely high, but continuous and predictable.

At level 80, considering Brutallus is a gear-check and dps race, there is little strategy required beyond burning him down as quickly as possible with two exceptions:

Following this strategy should minimize deaths to the raid and ensure a quick kill.

On the PTR, Brutallus was capable of being enslaved by a Warlock. This required the player to wall jump, and was considered an exploit. He spreads a debuff similar to Corrupted Blood, and can't be killed outside of the Sunwell Plateau instance. In a later build, he was affected by a scaling bug, which resulted in him being only slightly taller than players. 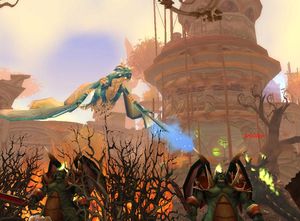 Brutallus喊道： Grraaarrr! You think to make an icicle out of me? Come down, then I will add real fire to your life.
Madrigosa喊道： I hear Pit Lords are born from maggots, Brutallus!
Brutallus喊道： Stupid blue birdie! Let's see if you can pull this maggot from the dirt!
Madrigosa喊道： I prefer my meals a bit colder!
Madrigosa encases Brutallus in a block of ice.
Brutallus喊道： Come down! I tear your wings from your shoulders and feed you to the dirt. Then YOU be the maggot, dragon!
Brutallus喊道： Crush these stinking husks!
Brutallus喊道： Beat or be beaten! This is the way of the Legion!
Brutallus喊道： Burn their bodies, shred their skins, crush their creaking carapaces!
Brutallus喊道： No horror here can compare with what you'll face when I'm through with you!
Brutallus喊道： Harder, maggots! We must keep the Sunwell clear for the master's return!

When hit by some Arcane Charges (quest item)
Brutallus喊道： What is this pathetic magic? How about you come back with twenty-four of your best friends and try again, <race>!

Berserk
So much for a real challenge... Die!