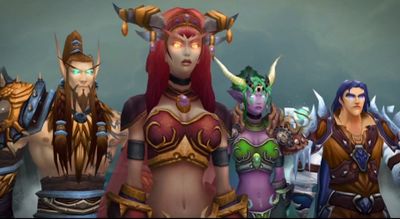 The last Aspects of Azeroth (from left to right): Nozdormu, Alexstrasza, Ysera and Kalecgos.

Creation of the original Aspects 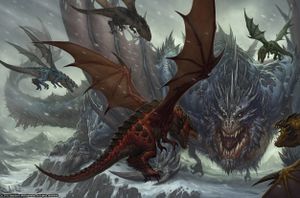 The Dragon Aspects, before they were Aspects, facing Galakrond.

Before they were dragons, the Aspects were proto-dragons. They stood united against a bloodthirsty monster who threatened their race, the Father of Dragons known as Galakrond.[5]

After the ordering of Azeroth, the titans prepared to leave Azeroth. However, before they departed, they charged the greatest species of the world, the dragonflights, with the task of watching over Kalimdor, lest any force should threaten its perfect tranquility. There were many dragonflights in that age, yet there were five that held dominion over their brethren. It was these five flights that the Titans chose to shepherd the budding world.[6] The greatest members of the Pantheon imbued a portion of their vast power through titanic Watchers upon each of the flights' leaders who defeated the massive proto-dragon known as Galakrond.[7] These majestic dragons became known as the Aspects. However, mortals are told that the Aspects were created from Galakrond.

Aman'Thul, the Highfather of the Pantheon, charged the bronze dragon Nozdormu with guarding over time itself and police the ever-spinning pathways of fate and destiny. Eonar, the Titan patron of all life, blessed both the red dragon Alexstrasza and her younger sister, the green dragon Ysera, so they would safeguard all living creatures and watch over the growing wilds of the world, respectively. Norgannon, the Titan lore keeper and master magician, made the blue dragon Malygos the guardian of magic and hidden arcanum. Khaz'goroth, the Titan shaper and forger of the world, gave the black dragon Neltharion dominion over the earth and the deep places of the world.

Thus empowered, the Aspects were charged with the world's defence in the Titans' absence. With the dragons prepared to safeguard their creation, the Titans left Azeroth behind forever.[6]

The titans empowered the five dragons, each with specific powers, to lead the dragonflights and watch over Ancient Kalimdor and its evolution[8] (at the time, the sole continent of Azeroth). According to legend, when the Aspects were first created, the moons had been in a rare conjunction known as the Embrace. A repeat of this same alignment was is crucial to the proper working of the magic necessary to facilitate the alteration of a normal dragon into an Aspect.[9] It is impossible to select a new Aspect or even even try to call a new one, as long as the current one lives.[1]

Aspects are more than just dragons with different skills and extra powers. When the titans blessed all of them - including later Kalecgos - they gave them insights and other ways of understanding things. They are more than dragons. Until the creation of Chromatus barring other Aspects, no single dragon was able to defeat one.[10] Although they are parts of a whole and were never meant to be separate, they are also complete unto themselves as well.[1] The titans gift is also a burden. Neltharion felt every rock in Azeroth pressed down on him. His body splintered and cracked. It was beyond physical agony; his spirit was unravelling, suffocated by the unfathomable load. He saw it as a life of eternal torment. However with it came an incredible strength, as the weight of Azeroth was his to command.[11]

When the titans departed, they said to the Aspects: "unto each of you was given a gift; unto all of you is given the duty"[1] Their one true duty was to prevent the Hour of Twilight at all costs.

According to the night elf Lorekeeper Lydros, the ancient and legendary blade Quel'Serrar was "crafted for an unknown entity by the combined might of the five Aspects" long before even the War of the Ancients.

Alexstrasza, Ysera, Malygos and Nozdormu fought the demons of the Burning Legion during the War of the Ancients. It was also in that war that the black dragon Neltharion deceived his fellow Aspects, using the Dragon Soul to steal a portion of their power. At the end of the War of the Ancients, the blue, green, bronze, and red Aspects had found and enchanted the weapon so that neither Deathwing nor any other dragon could wield it again. Millennia after that, it had fallen into the hands of the Dragonmaw orcs, who had then used it to enslave the Life-Binder and her brood. Many red dragons had been forced to act as mounts of war during that harrowing time. So Deathwing held the upper hand in every battle with the other, weakened Aspects, until the human mage Rhonin was able to use the scale Deathwing had given him to destroy the Dragon Soul. Cutting the scale across the surface, Rhonin unleashed the power trapped within and returned to the Aspects their essence given at the creation of the Dragon Soul.

The Hour of Twilight

The Aspects meet in Nordrassil.

Neltharion’s duty to protect Azeroth's earthly expanses meant that he was susceptible to the influences of Old Gods who were imprisoned beneath the planet’s surface.

The trials and tribulations that had afflicted the Dragonflights throughout history, from Deathwing's betrayal to the Emerald Nightmare, from the Infinite Dragonflight to the Madness of Malygos, were to culminate as the Hour of Twilight, the Old Gods’ grand scheme to eliminate the Aspects and usher the end of life on Azeroth.

Shortly after the Cataclysm, the orc shaman Thrall agreed to undergo a journey at the request of the Green Aspect, Ysera; a journey that eventually led him to Dragonblight and Wyrmrest Temple; there, Thrall was able to tap into Azeroth’s essence and use it to help bind Kalecgos, Ysera, Nozdormu, and Alexstrasza together, allowing them to combine their power and stave off an attack by the Twilight’s Hammer and the chromatic dragon Chromatus. Although successful in defending Wyrmrest Temple, the Aspects still needed to stop Deathwing. However, the fallen Aspect was so twisted by the dark energies of the Old Gods that not even the combined might of every living being on Azeroth could stop him. No physical assault, however immense, could destroy him; the only hope of stopping him was by unraveling his very essence, a power that only the Dragon Soul possessed. 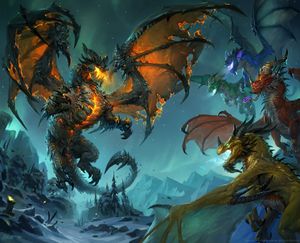 The other four Dragon Aspects face the Destroyer, Deathwing.

When Deathwing learned of their intent, he and his minions converged on Dragonblight and the temple to waylay them at any cost. Atop Wyrmrest Temple, the Aspects began to infuse the Dragon Soul with their essences once again, making it even more powerful than before. Kalecgos then began work to alter its properties so that it could affect Deathwing because he had never imbued his own essence into the disk. In order for the Dragon Soul to be used as a weapon against him, it had to be empowered with the essence of the Earth-Warder. Thrall possessed a portion of that very essence, and although it was incredibly small, he was able to impart it to the Dragon Soul. After the death of the twilight dragon Ultraxion, Thrall unleashed the freshly infused Dragon Soul upon its creator. Wounded, Deathwing fled toward the Maelstrom, attempting to return to the relative safety of Deepholm. Thrall, the Aspects, and the adventurers boarded the gunship the Skyfire and gave chase, fighting an army of Twilight Drake riders, led by Warmaster Blackhorn, along the way.

Upon catching the Black Aspect, the adventurers leapt from the decks of the Skyfire, parachuted onto Deathwing's back, and began prying away the elementium armor that protected the Aspect, eventually exposing enough of his warped body for Thrall to blast Deathwing with the Dragon Soul. Deathwing, critically wounded, fell from the sky and crashed into the Maelstrom.

Proclaiming victory, the defenders of Azeroth briefly rejoiced at having finally defeated the Destroyer, but the celebration was short lived. Deathwing rose from the Maelstrom, his body mutated into a mass of molten lava and tentacles. The final battle for Azeroth began in earnest, until one final blast from the Dragon Soul infused with the complete essence of each Aspect completely obliterated the fallen Aspect. With Deathwing truly defeated, the Aspects had fulfilled their duty of protecting Azeroth from the Hour of Twilight and the ancient powers granted to them by the Titans were expended; ushering in the Age of Mortals.[12] Fortunately, the Aspects are still true to the gifts given to them by the Titans, as life, magic, nature and time last forever.

Upon remembering the battle against Galakrond and urging of Kalec, the remaining Aspects decided that they will remain and help the world eventually.[13]

During an interview lead quest designer Dave Kosak explained that the Dragon Aspects stood in the spotlight because one of their own had gone bad. Now the Dragon Aspects will continue to be important and still be around, but they may not be central characters anymore. For example Kalecgos has been elected shortly before the Hour of Twilight and obviously he is still a dragon and he is still a very powerful mage, even if he is not immortal anymore. And he will still play a role in the world and will advise the Kirin Tor, he is just no longer the Aspect of Magic.[14] The bronze dragons still can travel between time, but they no longer have control over timelines.[15] In the Age of Mortals, mortal organizations need to take over what was once the charge of the Aspects. So all the characters are still important and their story will continue, even if they are not in the spotlight for the next expansion.[14]

The original Aspects in their humanoid forms: Nozdormu, Ysera, Alexstrasza, Malygos and Neltharion.

<vplayer /> {{#vlink:bYVA0Hh6u3U|The end of the Cataclysm and the power of the Aspects}}

Despite the fact that it has been made clear that Thrall cannot become an Aspect, during the events of Dragon Soul he is called "Earth-Warder" in his Dungeon Journal entry of the Ultraxion encounter.[17] During Thrall's journey to Wyrmrest Temple, a a minion of Deathwing says, "You are a fool if you think to take your place as the Aspect of Earth, Shaman!" In Jaina: Tides of War, Thrall states that he "merely held the space for the Earth-Warder".[18]