Were you looking for Comparison of Aldor and Scryer rewards?

"We are keepers of the Light."
— 伊沙娜, High Priestess of the Aldor[1]

奥尔多（Aldor）是An ancient order of draenei priests once run by Velen, the Aldor are currently led by 高阶女祭司伊沙娜. They are servants of the naaru in Shattrath City known as the Sha'tar. Rivals of the Scryers.[2]

As of the events of Warlords of Draenor, the Aldor still answer to the naaru first and foremost.[3] 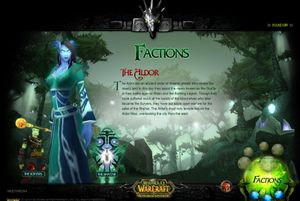 Originally led by the Ageless One,[2] the Aldor were charged with the safeguarding of the draenei holy sites and altars:[4] their holiest being located to this day on the Aldor Rise, overlooking Shattrath from the west.[5]

Two hundred years after the draenei arrival to Draenor,[6][7][8] the orcs started a genocidal war against draenei. The last and fiercest battle was fought in Shattrath[7][9][10], with the Aldor failing to protect the city from her enemies.[11] The city was left in ruins and darkness for many years, but the order returned and conducted its rites inside a temple on the Lower City.[9] It seems they also fought the sin'dorei loyal to Kael'thas when Illidan's reign as Lord of Outland began.[9]

When the "born from Light" came to Outland to fight the demons of the Burning Legion, they were drawn to Shattrath. The Aldor regained strength as word spread that the naaru had returned and reconstruction soon began. The ruined temple was repurposed as an infirmary for injured refugees.[9]

Turning in ten [Marks of Kil'Jaeden] to Adyen the Lightwarden in Aldor Rise will yield +250 reputation with the Aldor. There is also a repeatable quest for single mark turn-ins which yields +25 reputation with the Aldor. These marks drop from low-ranking Burning Legion members (mostly Shadow Council affiliated orcs) found in most regions of Outland, including the two camps north of Auchindoun in the Bone Wastes of Terokkar Forest. In addition these quests provide Sha'tar reputation: +125 reputation per ten or +12.5 reputation per single turn in.

Until Revered and Exalted

Besides completing the faction-specific non-repeatable quests, players seeking to attain 崇敬 and 崇拜 status with the Aldor may turn in [Marks of Sargeras] upon reaching level 68. Each turn-in of ten Marks yields +250 reputation with the Aldor, and each turn-in of a single Mark yields +25 reputation with the Aldor. These Marks drop from high-ranking members of the Burning Legion (i.e., mobs level 66 or higher). These mobs may be found in Blade's Edge Mountains, the Netherstorm, Shadowmoon Valley, and the Isle of Quel'Danas. In Blade's Edge Mountains, Death's Door boasts the most compact group of mobs that drop [Marks of Sargeras]. Assuming no additional reputation from any other source is earned, it takes approximately 1320 Marks of Sargeras or 95 [Fel Armaments] to reach 崇拜 status from 尊敬 status with the Aldor.

[Fel Armaments] may be turned in at any time to High Priestess Ishanah inside the Shrine of Unending Light on the Aldor Rise. Each turn-in yields +350 reputation with the Aldor. In addition to reputation gains, characters will receive [Holy Dust], a form of currency used to purchase shoulder enchants in the Aldor bank. Approximately 17 are required to go from 友善 to 尊敬 status.

It is possible to defect from the Scryers to the Aldor, though doing so eliminates all reputation previously earned with the Scryers. In order to switch factions, players must find Sha'nir, an Aldor located in Lower City. She offers the quest Quest:Strained Supplies which requires characters to turn in eight [Dreadfang Venom Sacs] for +250 reputation with the Aldor. This quest may be repeated until achieving 中立 status with the Aldor, at which time it becomes unavailable. Please note, there will be a point when a player is 冷淡 with both factions and therefore unable to use any bank or inn, so it is probably a good idea to hand in all needed venom sacs at once. Characters previously allied with the Scryers who are 仇恨 by the Aldor will need to complete the quest approximately 168 times, requiring 1,344 individual Dreadfang Venom Sacs, to attain 中立 status. After the switch some quests will be available although the player has finished their Scryers' counterparts:

Arcanist Xorith and Haldor the Compulsive sell specialized flasks usable only in raid zones to characters who are 崇拜 with the Cenarion Expedition, the Sha'tar and their respective faction (i.e., either Scryer or Aldor). The flasks are only purchasable with [Marks of the Illidari] obtained from creatures in the Eye of Tempest Keep, Serpentshrine Cavern, Mount Hyjal, and the Black Temple.

The following Aldor Reputation Rewards can be purchased from Quartermaster Endarin in the Aldor Bank in northwest Shattrath City:

The following Aldor Inscription rewards can be purchased from Inscriber Saalyn in the Aldor Bank in northwest Shattrath City:

For a detailed comparison of Aldor and Scryer merchandise as it relates to each class and trade, see: Aldor vs. Scryer

As of Patch 2.4, the epic pendants sold by Shattered Sun Offensive quartermaster Eldara Dawnrunner in Isle of Quel'danas have procs that only trigger when at exalted reputation with Aldor or Scryer. What procs exactly depends on the neckpiece and chosen faction.

The Altruis quest from Shadowmoon Valley leads to a series of prerequisites (below) for the Nagrand quests, none of which award Aldor rep.

Once these quests are completed, you can receive the following rep quests: