"You're quite the helper to ol' Greatfather Winter." [1] 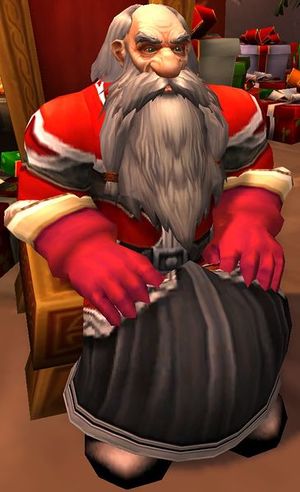 Dwarves have a winter festival where they tell stories about Greatfather Winter; in recent years, more and more humans have been participating in this event.[2]

The term "Winter Veil" is said to stem from a supernatural being referred in many cultures to as Greatfather Winter. As he would walk the land late in the seasons, winter itself would be his billowing cloak. In his wake was the blanketing of the land in snow, and thus it is said that Greatfather Winter would cast his wintry veil over the land. As Greatfather Winter walked Azeroth, it is said he would provide a bounty for those who welcomed his presence. As such, the idea of feasting during the winter veil would bring together communities as they shared whatever they had. Typically, a single day of merriment and feasting welcomed the change, all in anticipation of the land's renewal.

The image of Greatfather Winter is sometimes used, as a harbinger of commercial exploit rather than as a supernatural titan. Greatfather Winter visits the great cities of Ironforge and Orgrimmar - courtesy of the fine folks of Smokywood Pastures and he spreads cheer in celebration for the Feast of Winter Veil. But, all the cheer-spreading makes Greatfather Winter hungry, and he looks for adventurers to get him his daily fix of milk and cookies.[3][1]

Greatfather Winter is now seen as a kind old dwarf, or orc, who brings presents to everyone. Although many people, such as lorekeepers, have their thoughts about this commercializing of him by the Jinglepocket goblins, it is a nice idea nonetheless.[请求来源]

I Got What Yule Need

During one Winter Veil celebration, he got drunk and had to be replaced by the goblin Krizz. He would also be involved (if not drunk) in dark iron's plans as having traveled to the Ironforge Airfield and using Reindeer Dust on a giant robot that would took presents for delivery. However, in those gifts were treasures from the vaults of Explorers' League and Royal Treasury stolen by the dark irons. Thanks to Krizz, the plan was foiled.

At the end of the story, a being who is presumably the real Greatfather Winter watches the Winter Veil festivities of people across Azeroth. He appears ethereal, as if he is made out of the blowing snow around him.

It is possible that Hodir is the original Greatfather Winter (which goblins later commercialised) as he has been referred as "father figure" and connected to ice and snow. He also refers to veil of winter in Ulduar.