考雷斯特拉兹曾经参与过艾泽拉斯历史上的许多重大事件，包括上古之战，从龙喉氏族手中解救阿莱克斯塔萨，太阳井的重建，对抗巫妖王的战争，以及大地的裂变前后的事件。 While tending to the new clutch of red dragon eggs within the Ruby Sanctum, Korialstrasz sacrificed himself to halt the nefarious efforts of Twilight's Hammer.

He is described as being also a fighter, hyper-intelligent and known for his stand-up confidence and self-control.[1]

Krasus in The Well of Eternity.

At the beginning of the first war against the legion, Korialstrasz became incredibly and inexplicably weak. The cause, which Alexstrasza later determined, was Korialstrasz's future self, Krasus, existing the same time period as a result of being flung back from ten thousand years in the future (See Modern Era section below). Neither incarnation was able to shape-shift during this time. After being rescued from Cenarius' glade, Krasus was brought to Life Caverns, home of the Reds, where he was united with his past self. Despite great temptation, Krasus refrained from revealing any future events to anyone, even his queen, from fear of radically altering the future. Aided by a vision from Nozdormu the Timeless One, the younger and older Korialstraszs then teamed up to find the young druid Malfurion Stormrage, eventually joining the 暗夜精灵 resistance to the Burning Legion's invasion. Often, while Krasus led the night elf spellcasters, Korialstrasz would either aid the host from above, raining fire down on the demons, or rally some sort of surprise ally. Both Krasus and Korialstrasz fought valiantly against the likes of Hakkar the Houndmaster, Mannoroth the Destructor, Archimonde the Defiler, Sargeras the Destroyer, and their twisted former friend and allies, Neltharion the Earth-Warder and his Black Dragonflight. After escaping the Great Sundering of the 永恒之井(副本) and the legion's defeat, Krasus and his companions were returned to their own time by Nozdormu.

Second War and after

Prior to the 第二次战争, Korialstrasz assumed the identity of a high elf mage named Krasus, and became one of the senior leaders of the Kirin Tor — the ruling council of the magocratic kingdom of Dalaran alongside Antonidas, Prince Kael'thas and Kel'Thuzad. He, along with his colleagues, questioned the young mage Khadgar on the events that occurred in Karazhan some years previous — including the death of Medivh, the apparent presence of Sargeras, and Khadgar's descriptions of Draenor.[2]

After the Second War, Krasus learned from Antonidas that orcs ridden on black dragons had stolen several ships from the Menethil Harbor. At that moment, Arcane Vault of Dalaran was destroyed and robbed of its artifact - the Eye of Dalaran by death knights. Krasus, Kael and few others then helped Antonidas in attacking the death knights, however they escaped with the help of Deathwing and his black dragons.[3]

阿莱克斯塔萨被部落抓获囚禁，兽人们将她的龙崽用于战争。克拉苏斯利用他的身份为从龙喉氏族手中解救红龙女王做进一步努力，尽管他的其他亲属已经放弃。事情一直没有什么进展，直到战争的末尾，克拉苏斯派罗宁去卡兹莫丹执行一个侦查任务。克拉苏斯给了罗宁一个额外任务：解救红龙女王。得知死亡之翼想要去杀了红龙女王后，考雷斯特拉兹尝试寻找其他三位守护巨龙：玛里苟斯、诺兹多姆和伊瑟拉，只有有了他们的帮助才能击败黑龙。 However, their responses held bleak hope for his Queen. Whilst trying to scry into Lord Prestor's hovel, he triggered a magical trap known as the Endless Hunger, and lost the two last fingers on his left hand.

When the final battle at 格瑞姆巴托 began, Korialstrasz assumed dragon form once more and made haste in order to recapture the 恶魔之魂 from Nekros Skullcrusher. Nekros tried to use the 恶魔之魂 on him but despite its great power, Korialstrasz was able to break free. Weakened, he dropped to the earth where he summoned Rhonin to him and asked him to do this task. The three 龙王 arrived and healed Korialstrasz, then battled Deathwing. The battle took a turn for the worse until Rhonin destroyed the Demon Soul and the Aspects could now attack with their full power. Deathwing was no match for their combined might, and fled. Korialstrasz was reunited with his Queen and, after gathering up her unhatched children, they disappeared off into the night.[4]

Shortly before the Third War, Krasus was present at a banquet held in honor of Arthas and Kael who at the same time were present in Dalaran.[5]

War of the Ancients - present time

Korialstrasz was later called upon by Nozdormu to heal a rift in time. While exploring the time anomaly, Krasus and his former apprentice Rhonin were swallowed by the anomaly and thrown ten thousand years into the past. (See War of the Ancients section above). Upon his return to his own time period, Korialstrasz delivered the Axe of Cenarius and story of Broxigar to the Warchief Thrall, then flew off to rejoin Alexstrasza.[6]

Korialstrasz originally saw the re-accumulation of the Sunwell's energy right after Kael returned to the forsaken homeland and destroyed the tainted Sunwell,[7] and did not want the Lich King's new death knight, the treacherous Prince Arthas, to discover it. Korialstrasz formed the energy into a humanoid shape — the form of a peasant girl named Anveena Teague. Hiding the truth from her until a later time, Korialstrasz gave Anveena the illusion of having lived a normal life. Though not intentionally, she came to life and gained feelings and emotions all on her own through his masterful illusion.

Years later, Anveena and Kalec began searching for a mysterious mage named Borel in order to remove cursed collars. Borel had appeared to Jorad Mace who during the Third War wanted to escape the mad Arthas. Having no strength, Borel helped Jorad to survive. Borel's true identity is later revealed - the red dragon Korialstrasz. He began telling Anveena the truth — that she was the avatar of the Sunwell — when Dar'Khan Drathir, the elf who allowed Arthas into 奎尔萨拉斯, intervened and began draining the power from her.

Korialstrasz never meant to intrude upon the events taking place, until Dar'Khan — upon gaining some of the power of the Sunwell he drained from Anveena — took control of the red dragon. Unable to break the mind control, Korialstrasz was forced to do battle with the blue dragon Tyrygosa, until the spell was broken by Raac. While the battle against Dar'Khan continued, Korialstrasz had once more stepped to the side to observe all of what transpired. In the end, he said that he would continue to watch over Anveena and Kalec through the eyes of Raac as they stayed in the care of Lor'themar Theron, the Regent of Quel'Thalas.[8]

Krasus in Night of the Dragon.

Korialstrasz is mentioned on several occasions:

Night of the Dragon

Seeking something amiss Krasus decides to journey to Grim Batol in order to understand what force was darkening it's halls. En route to his destination he is attacked by a band of 纳迦 and after dealing with them, he continues his journey in his mortal disguise. In time he would meet the Draenei priestess Iridi and re-encounter Kalec. At first, Kalec's attitude towards the consort of Alexstrasza was bitter and antagonistic; he blamed Krasus for his constant interference, and particularly for giving Anveena the illusion of life knowing how it would end.[9] The pair would eventually end up arguing and Krasus would reveal that he took the time to memorize the lives of everyone he had manipulated. The two dragons would then separate from Iridi as Kalec rushed off and Krasus teleported her away. During the battle that followed the pair would be captured and brought to Grim Batol.

In Grim Batol's halls, Kalec and Krasus discovered the black dragon Sintharia, now known as Sinestra, creating a new flight of dragons. Working together, oftentimes begrudgingly, the pair were able to escape and working with 罗宁, 温蕾萨·风行者, Rom, the draenei priestess Iridi, and the nether dragon Zzeraku, they overcame Sintharia and her creation, the twilight dragon Dargonax. Iridi perished in the final battle, and Kalec took it upon himself to return her body to 外域. When asked by Krasus if Malygos would allow him to go to Outland, Kalec replied that — permitted or not — he was going anyway; to see Outland once more was Iridi's dying wish, and she deserved to be buried there. Krasus then departed Grim Batol in order to return to his queen. 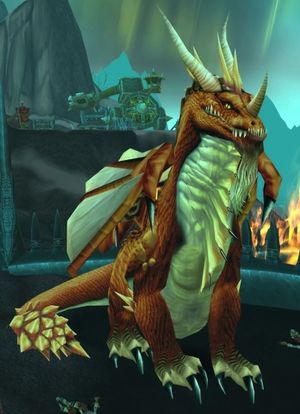 Krasus in World of Warcraft.

Korialstrasz finally makes his in-game appearance in World of Warcraft: Wrath of the Lich King, in the guise of Krasus. He is located at the Wyrmrest Temple in the Dragonblight at the side of Alexstrasza. Judging from Nalice's comments in Quest:The Obsidian Dragonshrine, it was Korialstrasz who called for the dragonflights to come together in the Wyrmrest Accord to battle Malygos' crusade. He also appears in his natural dragonform with his Queen at Angrathar the Wrathgate following the battle there. Upon players obtaining the Key to the Focusing Iris (starter) from Sapphiron in 纳克萨玛斯(旧版), Krasus gives the players the quest to defeat Malygos and obtain the Heart of Magic from the Eye of Eternity.

He is involved in the following quests:

In addition, there is a platform known as Krasus' Landing in the rebuilt city of Dalaran, where the city's flight master is located. As of Krasus death (see below), Modera is the last living member of the Second War-era Kirin Tor high council to appear in World of Warcraft.

When the Nightmare attacked Azeroth, Korialstrasz was settled down in his mountain sanctum near the place where Dalaran once stood. There, he had nightmares in which he became source for Deathwing´s new Demon Soul. Korialstrasz was later present for the wedding of 玛法里奥·怒风 and 泰兰德·语风, as Alexstrasza was performing the ceremony alongside Ysera.[10]

At some point before his demise, Krasus made the following prophecy and bequeathed it to Rhonin, describing a future leader of the Kirin Tor:

After the red comes the silver,
She who was golden and bright;
The Proud Lady humbled and bitter,
Shall now turn her thoughts to the fight.

Saphire to diamond she gleams now,
The Kirin Tor leader who comes,
"Queen" of a kingdom now fallen,
Marching to war's martial drums.

Be ye warned - the tides of war
At last shall break upon the shore.

The prophecy was fulfilled with the death of Rhonin and the ascendancy of 吉安娜·普罗德摩尔, former ruler of the destroyed city of Theramore, as leader of the Kirin Tor.[12]

Korialstrasz is an ancient, wise, and powerful dragon of the red dragonflight. He was Alexstrasza's newest consort just prior to the War of the Ancients and continues to be so to this day. As her current prime consort, Korialstrasz acts as Alexstrasza's majordomo in all affairs. He is fiercely loyal to his queen, and was "first in love" among her consorts. As an active agent of the red dragonflight he is a protector of all things living, often spending time away from his queen and kin for his duties. He constantly watches over the younger races, often taking mortal guises and hiding amongst them. His most prominent guise in recent times is that of Krasus, a 高等精灵 mage of the Kirin Tor, and a member of the Six; the ruling council of Dalaran. Another guise is that of Borel, most likely his alias among the Convocation of Silvermoon. [请求来源]

Krasus appears to be a high elf wizard of extreme confidence, secure in his power and rank among the council. His very presence commands respect, and yet he is not proud or haughty. He remains in his elven form almost exclusively, transforming into a dragon only for special reasons or when in the presence of others of his kind. Those few who know his true nature have agreed to keep it a secret.[13]

Krasus remains in his elven shape as long as possible during battle, revealing his dragon form only if desperate. He almost never shows his great strength in physical combat, preferring instead to fight with the spells and other arcane powers at his disposal. Should he choose to show his dragon side, he takes to the air swiftly, using his breath weapon and spell-like abilities to speed his escape. For all his strength and power, he is actually quite inexperienced in draconic combat. After all, he’s had little opportunity to practice during his decades of roaming the surface of Azeroth in humanoid form.[13]