Under the command of Saidan Dathrohan, Mograine and Fairbanks traveled to 铁炉堡 to ask King Magni Bronzebeard to forge the mighty blade. Magni, having only just learned of his brother's apparent demise, was more than willing to craft a weapon to battle the undead, and described it as the greatest creation wrought by his hand.

Mograine and the other Knights of the Silver Hand banded together to continue the war against the Lich King during the next years. Alexandros was appointed Highlord and the Ashbringer was the Order's greatest weapon. However, the blade caught the attention of 克尔苏加德. Striking a deal with Balnazzar, who had covertly taken control of the Order by possessing Dathrohan and wished to use it against the Lich King, the two planned to kill him. To do so, Balnazzar corrupted Mograine's son Renault and had him lead his father into a trap. Renault led his father and High Inquisitor Fairbanks to 斯坦索姆 where an army of undead waited for them. Renault fled and Fairbanks, being the first to fall, was trapped under the pile of undead corpses. Mograine stood alone against the undead, yet managed to destroy all sent at him. In fatigue, Alexandros dropped his blade. Renault returned and killed Mograine with his own sword, corrupting the Ashbringer. Unable to use the blade, Renault left it with his father's corpse.

However, Kel'Thuzad raised the Ashbringer's corpse turning him into a 死亡骑士 of the Scourge, and reclaimed his blade. Kel'Thuzad took Mograine back to Naxxramas to have him serve as one of the Four Horsemen. Later, led by nightmares of his father's tortured soul, Darion led a small group of 银色黎明 members into 纳克萨玛斯 to free him. Darion was the only one to survive the assault, escaping with the blade but forced to leave his father's body behind.

When Darion returned to the Scarlet Monastery with the blade, Alexandros's corrupted spirit manifested and confronted Renault, accusing him of murder before mercilessly killing him. Later, during a Scourge assault on 圣光之愿礼拜堂, Darion plunged the Ashbringer into his own chest in an act of self-sacrifice that obliterated the Scourge armies and seemingly freed Alexandros's soul of the Scourge's corruption. In doing so, however, Darion damned himself into undeath and was escorted off the battlefield by Kel'Thuzad.

During the 第二次圣光之愿礼拜堂之战, Darion - now a death knight himself and wielding the Corrupted Ashbringer - led an attack against Light's Hope Chapel but he was defeated by 提里奥·弗丁. During the dialogue between Darion and Tirion, Alexandros's spirit appeared and a dialogue between father and son - evidently a flashback of some kind - took place. Alexandros mentioned that Darion would one day wield Ashbringer. However, their reunion was cut short by the arrival of the Lich King, who claimed Alexandros's soul with 霜之哀伤.

As a result of his story advancement since his original in-game appearance, Alexandros did not return in Naxxramas with the rest of the Four Horsemen. According to Commander Eligor Dawnbringer's lecture in 暮冬要塞, Alexandros "was the finest warrior that the Death Knights had ever seen. However, after the events in 艾泽拉斯世界, he vanished without a trace. Kel'Thuzad has appointed 瑞文戴尔男爵 in his place."

In the Unsealed Chest taken from the Lich King after he is defeated by a raid in which someone is wielding Shadowmourne, an item known as Alexandros' Soul Shard is found. When returned to Darion, Alexandros's spirit appears for the final time, thanking Darion for saving him from damnation.

With the Corrupted Ashbringer

模板:Classic only-section Players who obtained the [Corrupted Ashbringer] from the original version of Naxxramas could take it to the 血色修道院 and see a special event in which Alexandros Mograine returned, killed his son, and frees Fairbanks' spirit from his undead form. With the updated lore in the comics and the expansion, however, this event and the information given by Fairbanks regarding the Ashbringer have mostly been retconned out. 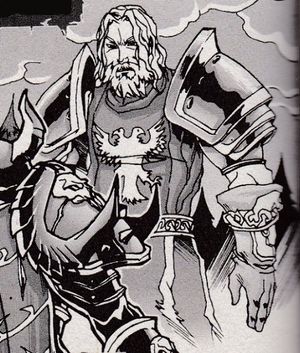